Since food and gas prices keep rising, I’m looking for more ways to cut my expenses.

I already use most of the techniques I listed in my post “35 ways to cut your food bill.”

However, I’m taking a closer look at one of the items, eat less meat.

One of my health care providers suggested that since I tend to have low blood sugar, I should eat protein the size of a deck of cards at each meal. He's an advocate of the low carbohydrate diet.

Another health care provider said since I have type A blood, I should be on more of a vegetarian diet. He suggested eating more lentils. 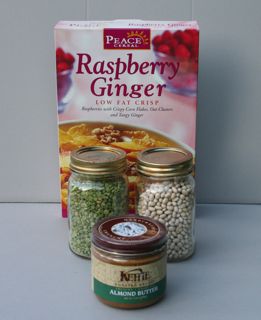 When I was shopping at my local food co-op today, I bought organic green lentils at $1.32 a pound rather than organic red lentils, my usual purchase, at $1.57 a pound.

I bought organic small navy beans at $1.29 a pound, rather than organic baby Lima beams at $1.54.

The organic green split peas at 91 cents a pound were my choice instead of my usual purchase of organic yellow split peas at $1.39 a pound.

When I was at the co-op earlier in the week, I bought about half a bunch of celery out of the reduced produce bin, which cost 50 cents a pound. So I bought a jar of almond butter to spread in the celery. I thought it would make a good protein snack to eat when I’m blogging.

I selected the nonorganic 11-ounce jar for $8.14. I wasn’t sure I could eat the larger jar for about $12. I’m being more careful about wasting food in these high-cost food days.

I was surprised when I wrote my blog on worm composting yesterday about how much food is wasted in the United States. We waste 96 billion pounds of food yearly.

While I was pleased to be making savings in my food shopping trip, I worried I might have blown my good work. I bought an impulse item on sale; a box of cold cereal, Raspberry Ginger Low Fat Crisp – Raspberries With Crispy Corn Flakes, Oat Clusters, and Tangy Ginger. The cereal is 73 percent organic. I paid $3.29 for seven servings, that’s 47 cents a serving.

When I checked the cost of the organic kamut cereal I cook myself, it’s $1.44 a pound, or 48 cents a serving. Kamut is a type of wheat. I think barley is cheaper, so I’ll get that next time.

My treat, which I ate with much joy as I wrote this post, organic bing cherries for $5.98 a pound. They’re so good. The bing and Rainier cherries are only available for a short time in Washington state, even though we grow them in the state and 70 percent of the cherries grown in the U.S. come from the Northwest. I heard on NPR today cherries are Washington state’s third largest crop, and they bring $500,000 million to the state each year.