Home About Newsletter Categories Donate
Dr. Oz: Now I’m stressed about how my stress level is causing me to age
Is your household too fat and bursting at the seams with clutter? These clutter tips help put your house on a diet

My neighborhood arterial to be torn up for one year

When I returned home from my vacation in May, a friend and neighbor picked me up at the airport. 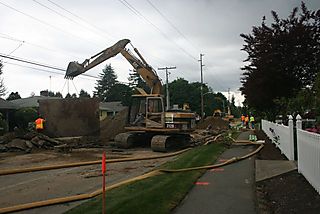 “I’d take you around, but you’d miss the excitement,” she said, when we were approaching our neighborhood

What my friend called excitement was the arterial that connects our neighborhood to everything is being torn up to install new sewers. And, before the City of Tumwater puts it back together, it also will install new sidewalks.

The project will take an entire year.

I’m better off then my friend. She lives on a dead-end street. If the construction crews dig an 8-foot-by-8 foot-by-8 foot hole at the end of her street, she can’t get out. 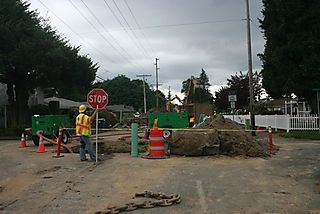 Right now, I have two ways I can go around. That may not always be the case. As they move up the street, the construction crews don’t seem to finish anything. They just keep tearing up more streets and sidewalks.

The day I took the photos, I was headed to my friend’s house to deliver something. That was my excuse, anyway.

The construction boss saw me and asked me if I was from The (Tacoma, Wash.) News Tribune. I said no, but thought of the irony of the question. I had written a senior consumer column for The Tribune for 18 years.

He yelled at me and told me he didn’t want me walking in his construction site. I told him I lived in the neighborhood. Then I stopped taking photos and got myself out of there as fast as I could. 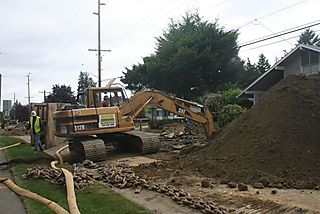 I called the city manager when I got home. I told him that although I was wrong to be walking in the construction site, the crew boss didn’t need to yell at me.

I also suggested that they have workers or city employees escort school kids through the site. A high school and middle school are located nearby. I saw a teen with a backpack picking his way through the construction site as I was scurrying home.

The city manager said they couldn’t afford to pay people to do that, but they would string up yellow warning tape around the huge holes. I noticed the taping is being done.

I’ve kept away from the site by driving around it. 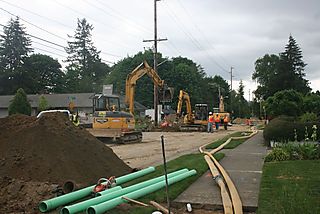 On two occasions when I was in a hurry, however, I tried to drive through the mess. Most evenings, the crews leave a path so people can get to their homes.

On both occasions, I got through most of the construction only to find that the spot at the beginning was completely blocked off. I had to go around and was late anyway.

The only thing I got for my efforts was a dirty, messy car. The crews are watering down the construction site to keep the dirt from blowing.

When my car battery died Thursday, my neighbor drove me to the dentist. I took the bus home. Of course, the bus couldn’t drop me near my home due to the construction. Although I could walk on people’s lawns for more than half of the way, there I was walking through the dirt and mud with my good shoes. I didn’t think about the need to be walking through the construction site until I was in the dentist chair getting my new crown.

I’ll probably write about this again. A year is a long time to deal with a major detour.