One in three baby boomers is not just overweight but obese.

Having the number of calories listed for every item on the menus of fast food restaurants would help boomers lose weight. 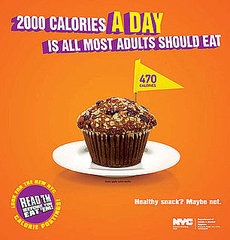 New York’s "Read ’Em Before You Eat ’Em" postings, which require the calorie information, is being seen by health officials throughout the United States as a good way to attack the growing obesity rate.

Some restaurants don't like the requirement, so they're suing, according to an editorial in The New York Times. They and other restaurants support the LEAN Act, a new bill filed in Congress. This bill would kill New York and California calorie requirement laws and let restaurants put calorie information in a brochure or at the end of the menu.

The Times editorial suggests that instead Congress should pass a law that would require the New York system nationwide.

One company is embracing the calorie postings, The Times stated in its editorial:

Yum Brands announced earlier this month that it will begin adding calorie counts to the menu boards at company-owned franchises, including its Kentucky Fried Chicken, Pizza Hut, and Taco Bell outlets. Its goal is to label all menus by 2011.

With America’s growing health and obesity problems, it is important that more consumers have access to more detailed nutrition information, especially when dining out, in an easy and convenient way.

Now we have the chance to provide consumers across the country exactly what they are looking for and need. There is a bill before Congress, the LEAN Act (Labeling Education and Nutrition) that will do just that. It is modeled after the federal Nutrition Labeling and Education Act (NLEA) that provides consumers nutrition information on packaged food and beverages.

But calories are just part of the information necessary to make smart food choices. Consumers should know about a broad range of nutrition information, including sodium, fat, cholesterol, carbohydrates and protein as well as calories.

That is why the LEAN Act will require that restaurants have detailed nutrition information—such as calories, transfats, saturated fat, sodium, cholesterol, carbohydrates, sugars, and protein—available in writing in the restaurant. Using one national standard will help consumers get the same information wherever they happen to dine across the country. It will also give restaurants the flexibility to present written nutrition information in an easy and convenient manner that best meets the individual needs of their diners.

Passing the LEAN Act to establish a uniform national nutrition standard for chain food service establishments that also provides the flexibility to accommodate their inherently different needs is practical and fair. And it is the one way to make sure that more consumers get more nutrition information no matter where they dine.

Now we need Congress to pass the LEAN Act. And we need your help to get it done.

Please visit www.nationalnutrionstandards.com to get more information and help us bring more nutrition information to everyone across the country.

CORRECTION TO THE LINK IN MY PREVIOUS COMMENT: Please visit www.nationalnutritionstandards.com to get more information and help us bring more nutrition information to everyone across the country.

CORRECTION TO THE LINK IN MY PREVIOUS POST:
Please visit www.nationalnutritionstandards.com to get more information and help us bring more nutrition information to everyone across the country.

It's strongly advisable to not expose our kids on fast foods and junk foods. This is for their own good and health.

I don't agree with you about the LEAN Act and the National Restaurant Association's attempts to get it passed. People need to know the calories on the menu or on the display board.

I read about the law before I wrote my post. It is another industry attempt to circumvent what consumers need.

Thank you for the comment on my about not exposing our kids to fast foods and junk foods. I agree totally.