Home About Newsletter Categories Donate
What are you doing on Election Day?
Reforms a must in next four years for baby boomer consumers

Barack Obama IS a baby boomer

It's hard to believe!

Many people, even knowledge commentators who should know better, are saying President-Elect Barack Obama is a non-baby boomer. 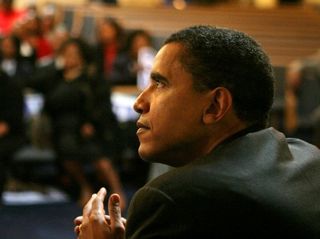 Granted, he is one of the younger baby boomers.

The term "Generation Jones" was coined by Jonathan Pontell, who argues the boom began in 1942 and ended in 1953. Pontell places Obama in Generation Jones, a term he says characterizes those born during the years 1954 to 1965, who, according to his polling, largely don't identify either as boomers or Gen Xers.

While Pontell's has gained attention with his hypothesis, it isn't the accepted definition of the term baby boomer.

David Brooks, an Op-Ed columnist for The New York Times, said in a recent column:

Generationally, it marks the end of baby boomer supremacy, which began in 1968. For the past 16 years, baby boomers, who were formed by the tumult of the 1960s, occupied the White House. By Tuesday night, if the polls are to be believed, a member of a new generation will become president-elect.

Not so. Obama is a boomer.

So baby boomer Obama, bring it on.

This country is ready for change.

He's most definitely a boomer.

The problem is that you are using the old tradtional '46-'64 definition of the Boomer Generation, while the reality is in 2008 that that defintion has increasingly become discredited and obsolete. That defintion was based on one thing only: a bump on birth charts, but generations have nothing to do with the fertility rates of that generation's parents.

Yes, there was a demographic boom in births between the mid-1940s and mid-1960s, but a concensus has emerged among experts that there were two entirely seperate generations born during that time: Baby Boomers and Generation Jones.

Take a look at this page, where you can find, among other things, excerpts from publications like Newsweek and the New York Times, and videos with over 25 top pundits, all talking about Obama's identity as specifically a GenJoneser:
http://www.generationjones.com/2008election.html

The U.S. Census Bureau defines what baby boomers are. See their Web site at www.census.gov/. They're the ones that set the definitions and gather the population data. You can't make up a new name for younger boomers just because you want to.

This is completely seperate from generations, which are not determined in any way by the Census Bureau...generations are determined by experts (like sociologists, generation experts, etc.) who study, for example, the effect of historical events on young impressionable kids, and how these events create ongoing collective generational personalities. These experts are primarily focused on psychographic (e.g. attitudes, values, etc.)variables rather than demographic (e.g. population size, etc.) variables like the Census Bureau.

There is no official designator of generations. These concepts come from the subjective opinions of experts. You say:"You can't make up a new name for younger boomers just because you want to", but that is, in fact, exactly how generations come about. Doug Coupland wanted to separate out Generation X by coining that term, and it caught on. Jonathan Pontell wanted to separate out Generation Jones by coining that term, and it is catching on as well. Hemingway: Lost Generation. Keroac: Beat Generation. Nothing official. No Census Bureau. Only the subjective opinions of experts.

Obviously, you want Obama to be a Boomer. You seem to have some sort of emotional stake in that, which is your right. But he's not a Boomer, and as the dust settles on his new Presidency, you will see that he is not considered a Boomer. He insists he's not a Booomer, experts have repeatedly referred to his election as the first Post-Boomer President, etc., etc. He is part of Generation Jones, whether you or I happen to like that, and that is fast becoming the accepted answer to the question of his generational identity.

I stick by my analysis; Barack Obama is a baby boomer.

Let's get something straight about American generations. Barack Obama, born in 1961, is a baby boomer, based on the most widely accepted definition of the post-World War II baby boom: 1946- 1964. I'm not sure why pundits such as you, Gail, want to shape the image Obama as a post-Boomer or a non-Boomer.

On the contrary, Barack Obama is the first fully Boomer president, unencumbered by regressive social values of post-World War II America, because...

1) He is personification of the post-racial dream of legions who marched on the streets for racial equality and economic inclusiveness.

2) He sharpened his wits as a community organizer, reflecting street-level civic engagement of a significant swathe of the Boomer generation.

3) His vision of a revitalized economy has its foundation in the green revolution, which became part of mainstream culture on April 22, 1970, the first Earth Day. Many critiquing Clinton / Bush overlook Al Gore as another face of the Boomer Generation.

4) He proposes a White House that will include active policy and leadership participation by Michelle Obama, something unprecedented before former First Lady, Hillary Clinton — another concrete example of gender equality becoming mainstream under boomer social leadership.

5) He will be a global thinker and consensus builder, in synch with boomers who became globetrotters in youth and fostered much of today's multi-culturalism in the economy (think Starbucks, a European import, as an example).

6) He will foster active civic engagement reminiscent of JFK who challenged boomers in their youth to give back, leading to the creation of thousands of new nonprofits and spiriting millions of hours of civic engagement during the last 40 years.

Barack Obama is the manifestation of a dream held by millions born between the years 1946 and 1964 who have worked to change society and make his presidency possible. Many of his keystone values are also boomer values.

Sorry,CultureWatcher and/or SocietyWatcher; Rita's right. For the past twenty years, I've been identified as a "baby boomer" and President-elect Obama is at least three years older than I. He's a "boomer" AND old enough to be a grandparent. Such a typical GenX response!

Thanks for writing on my blog The Survive and Thrive Boomer Guide to back me up on why Barack Obama is a baby boomer.

P.S. I'm getting a lot of hits on the Obama article I wrote. A lot of people must be googling Obama because the Inauguration is tomorrow.

Demographers like Neil Howe and William Strauss put 60-65 in Gen X. Jonathon Pontell pegs it 54-65. Josh Glenn puts us in 54-63 as Gen X'rs. So there is hardly a monolithic wall of demographers calling 60-64 baby boomers any more. At the very least it is a time of transition from boomer to gen X. I've never felt I quite belonged to either, i.e. a tweener - between generations.

Obama does not self identify as a boomer, nor do many of the rest of us born in the early 60's. I wasn't born when Kennedy was elected, Sputnik, the Cuban missile crisis and many other iconic boomer events happened. I don't remember JFK, RFK, or MLK. I wasn't anywhere when Kennedy was assassinated. I was 5 when Neil Armstrong walked on the moon. My father served in Vietnam, Ronald Reagan was the first president I could vote for. There was no Vietnam or draft when I was in high school and college. All those boomer cultural connections are not mine. His mother was a boomer, my parents are boomers.

Calling me a boomer does not make me one. I know so many others born in the early 60's that feel the same way. That we've been grafted on a generation that we did not experience culturally. We were put there strictly based on the number of births per year. That's a very weak correlation. Shared formative and cultural experiences are a stronger correlation. You can choose to insist that I'm a boomer, but that does not mean that I belong or become one and can choose to insist that I am not:-).

http://en.wikipedia.org/wiki/Baby_Boomers
In the 1985 study of US generational cohorts by Schuman and Scott, a broad sample of adults was asked, "What world events over the past 50 years were especially important to them?"[20] For the baby boomers the results were:

I was born in 1962 and am not a Baby Boomer. I clearly remember being taught in grade school about the Baby Boomers and that we were not among them. We were told we were part of a "baby bust." I must have been in my 30s before I heard that I was a Boomer. Somehow that generation had been stretched to include people born as late as 1964. I think it's more accurate to say that the baby boom ended in 1958 when the birthrate declined for the first time since the early 1940s. (Although it would be a stretch to say that those born in 1957 identify with the Boomers.) At any rate, I have nothing in common with the Baby Boom generation. I don't remember Eisenhower, JFK, LBJ, MLK or RFK. I don't remember Woodstock and never listened to Elvis, the Beatles or the Stones. I wasn't aware of the civil rights movement. I barely remember the first moonlanding and knew nothing of Roe v. Wade. Lumping my generation (and Barack's and Michelle's) with the Boomers is like saying the Flapper was a Gibson Girl.

Thanks for writing. I appreciate your opinions.

I'm sticking with my original analysis. Boomers are those born between 1946 to 1964.

Unless the U.S. Census Bureau changes its definition, those will continue to be the years of the Boomer Nation. Since President Obama doesn't associate himself with boomers, maybe his administration will change the definition.

Thank you so much for writing this piece, because, as a proud, card-carrying member of Baby Boomer Cohort 2 myself (born in 1961, as Obama was), I want to scream at the TV every time they say that Obama is "post-Boomer". NO!!!!!! The Boom was 1946 to 1964. I'm a Boomer and also I have a BA degree in cultural anthropology and sociology and I'm telling you, the man is a Baby Boomer, from the second half of the Boom. So, for better or worse, whatever he does in office becomes part of OUR legacy, not some post-Boomer legacy. Do us proud, Barack!

I appreciate your comment. I, too, get upset when commentators and bloggers call President Obama a Generation Jones or post-Boomer.

I've received some passionate comments about how I'm wrong, so it's good to know you, with your background, agree with me.

Who cares whether Obama is a babyboomer? He's destroyed America in the nearly 4 years he's been in office with the help of George Soros. I'm watching the decline of America which has been purposefully manufactured. My young children will most likely have less than I did growing up.

I don't agree with you at all. President Obama saved capitalism from the Great Recession brought on by corporate greed. He would be doing better now if his policies weren't being blocked by the far right.

Obama is without a doubt, a Baby Boomer.

Thanks for your comment about our President, Barack Obama, a baby boomer.