I was lucky to get a great new cookbook as a Christmas present from my daughter. It’s called “The New Glucose Revolution Low GI Vegetarian Cookbook” by Jennie Brand-Miller, Ph.D., Kaye Foster-Powell, R.D., and Kate Marsh, R.D. 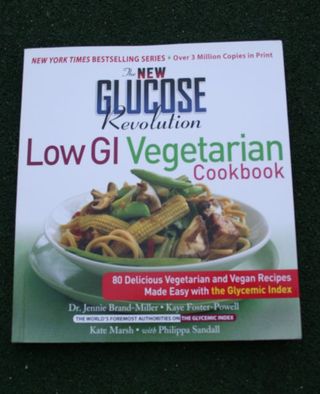 The thing that sets the book apart from other vegetarian books and cookbooks is information on foods as rated by the glycemic index. The index is a system that ranks foods by the speeds at which their carbohydrates are converted into glucose in the body.

Why is this important? Vegetarians eat a lot of carbohydrates. That’s even truer for vegans, who don’t eat dairy products or eggs. When you eat too many high GI foods, they’re digested rapidly and cause a quick rise in blood glucose. Insulin, a hormone that takes glucose from blood to be stored in cells, pours out of the pancreas.

If people eat high GI meals frequently, they could develop high insulin levels, which leads to insulin resistance, according to the authors of the book. With insulin resistance, cells that normally respond to insulin become resistant to it. The body thinks it needs to make more insulin to do its work. When the pancreas is worn out and doesn’t produce enough insulin to normalize blood glucose levels, type 2 diabetes occurs.

Eating more low GI carbohydrates, according to the authors of the book, will:

Some recipes offered in the book for vegan adults include: Chickpea and Vegetable Curry With Cumin-Flavored Rice; Vegetarian Pad Thai; Three-Bean Chili With Spicy Tortilla Crisps; Spaghetti With Steamed Greens and White Beans; and Lentil and Sunflower-Seed Burgers.

I became a vegan in August and have been concerned about eating so many carbohydrates. This cookbook is that what I needed to eat lower GI foods.