When I was doing research on what Martin Luther King had to say about consumers, I was surprised to learn that he supported a guaranteed income for all Americans in his last book, “Where Do We Go From Here: Chaos or Community?” written in 1967.

King said programs to improve housing and education and to offer counseling to families were sporadically funded and uncoordinated. And, in addition, he said such programs are indirect. Each seeks to solve poverty by first solving something else. 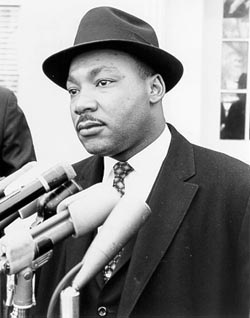 King, pointing out that at the time there were twice as many whites as blacks living in poverty, said dislocations in the market operation of our economy and the prevalence of discrimination thrust people into idleness and bind them in constant or frequent unemployment against their will.

“We also know that no matter how dynamically the economy develops and expands it does not eliminate all poverty,” he added.

“The curse of poverty has no justification in our age,” King said. “The time has come for us to civilize ourselves by the total, direct, and immediate abolition of poverty.”

King was right about the expansion of economy not eliminating poverty. It’s been more than 40 years since he wrote his book, and poverty in America and its social consequences are worsening.

Citizens Dividend, the Web site where I found the information on King’s book, describes how a guaranteed income for all would work.

It suggests funding guaranteed incomes not by getting money from producers and taxpayers, but by using revenue that wasn’t produced in the free-market portion of the economy – from monopolies, which are government-granted privileges.

An example from Citizens Dividend: When the federal government allows private broadcasters access to a new set of airwaves, instead of giving away the airwave rights to a few big radio or TV station owners, leases for the airwave rights should be auctioned off and the revenue from the auction of leases should go to citizens.

In Alaska, oil-drilling companies operating on state-owned sites pay a royalty to the state, which divides the money among Alaska citizens. It’s called a Permanent Fund Dividend check. I lived in Alaska for four years. It was great to receive the checks.

The guaranteed income certainly is worth considering, although I haven’t heard much about it in recent years.

Some argue these government figures are understated.

In 2007, 37 million people lived in poverty, with 10 million of those being black, according to The New York Times.

In 2007, a task force organized by the Center for American Progress prepared a report called “From Poverty to Prosperity: A National Strategy to Cut Poverty in Half.”

The 12 recommends of the task force are:

The guaranteed income wasn’t included in the recommendations of the task force.

Excellent post/article, Rita. Fitting for this inaugural week that features the swearing on of our first African American President and the commemoration of Martin Luther King Jr., also.

I've put your blog up in the Tie Dyed Tirades blogroll. We should link to each other - I'm sure our readers would enjoy the sharing of forums.

I'm glad you enjoyed the article.

Thank you for your comment and for including The Survive and Thrive Boomer Guide on the Tie Dyed Tirades blogroll.