Home About Newsletter Categories Donate
Can Obama do what's needed for American consumers?
100 ways baby boomers can improve their lives in 2009

What President Obama and Congress need to do for American consumers

In my last post, I looked at what President Obama said in his Inaugural address about consumer issues and discussed the challenges he faces in corralling the country’s strong special interests. 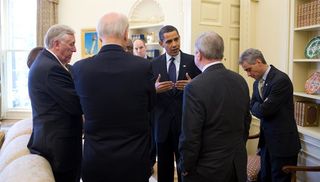 Here’s what I think Obama, working with Congress, needs to accomplish for American consumers:

I know this is a huge agenda, but American consumers are in need of drastic assistance after the gutting of consumer and environmental protections during the George W. Bush administrations.

How sad that the dead weight of the Bush administration must now fall on the shoulders of President Obama. He either has the opportunity to be the greatest President we will ever see in our lifetime or give the conservatives one more reason to say the majority got it wrong.

Thanks for writing. I do hope President Obama will be able to help American consumers.

The list is so long because, as you say, the omissions of the Bush administration fall on the shoulders of President Obama.