It brought back memories.

The movie “Food Fight: Revolution Never Tasted So Good” shows scenes from Berkeley, Calif., in the early 1970s when the Counterculture Movement was blossoming.

Baby boomers, looking great in their hippie clothes, are demonstrating against the Vietnam War, discrimination, and conspicuous consumption and gathering to support local farmers and nutritious, organic food.

The role of Alice Waters and her restaurant Chez Panisse in Berkeley are featured prominently in the film.

At the Seattle Green Festival, Waters, one of the world’s most famous chefs, was joined by “Food Fight” director Chris Taylor and organic farmer Tom Philpott to discuss the organic food movement and Edible Education.

Waters, who said she was surprised to be the “star” of Taylor’s film, told about how in 40 years, the regional food movement has spread across the country.

The movement isn’t about Chez Panisse, Waters said. Since the beginning of time, people have been eating seasonal foods, shopping in marketplaces, eating with friends, harvesting food in the fall, sharing it with friends, and eating it during the winter.

After World War II, people became separated from real food as the Fast Food Nation swept them up. Now we’re coming back to our senses, Waters said. 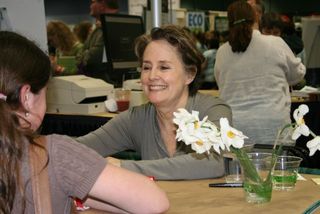 Taylor said as he was editing his film, it became apparent that Waters and Chez Panisse were an important part of the regional food movement. “At every turn in the story, she was there.”

When she was 19 years old, Waters traveled to France. The food tasted marvelous, she said, unlike the frozen foods that tended to make up the meals she ate in her New Jersey home when she was growing up.

“I wanted to eat like that [the way the French do],” Waters said. “I wanted to have a restaurant that served that kind of food.”

She’s never stopped in her quest to find and support quality locally grown foods, she said.

Committed demand is important for farmers, Waters said. She learned when talking to small, organic farmers that they couldn’t say for sure what their crops would be. She told them, “I’m in. I’ll pay whatever it costs. I’ll figure out how to use it.”

“Food Fight” shows how many others shared Waters’ interest in healthy, locally grown food and the Northern California regional food movement was born.

Farmers’ markets, where farmers sell directly to consumers, began to spring up. By 2007, more than 4,800 of the markets were located across the country.

Consumers enthusiastically embraced the regional food movement because it gave them the opportunity to choose better tasting, healthier food.

Waters is one of the national leaders in the Edible Education in the schools movement. In the program, children grow food in gardens at school and school cafeterias serve local, nutritious, organic food. Edible Education addresses the issues of childhood hunger and obesity, she said.

First Lady Michelle Obama’s organic garden sends a powerful message around the world, Waters said. The country needs to have people of power, honesty, and integrity deliver a message about stewardship and nourishment.

Waters said she never imagined Michelle Obama would bring school children in to work with her in the garden.

“I’m completely high from this,” she said.

Waters first wrote to the Clinton administration in 1992 about the importance of planting a vegetable garden at the White House. She’s been lobbying for a garden be planted there since then.