If you like Yes! Magazine, you’ll love David Korten’s new book “Agenda for a New Economy: From Phantom Wealth to Real Wealth.”

Korten, cofounder of the Positive Futures Network, electrified his audience at the Seattle Green Festival this weekend with his plan to get America’s financial system on a more socially responsible track.

With the earth in peril, inequality tearing us apart, two wars, and Wall Street still in charge of the economy and money-driven politics, citizens need to take action, Korten said. “We can’t wait for [President] Obama to get us out of this.”

In the new economy Korten envisions, Wall Street will be shut down. President Obama can’t do that without millions of people in the streets to demand our release from Wall Street rule, he said.

The financial crisis is about phantom wealth – modern chits, which are created out of nothing and protected with the demand for no government regulation.

Phantom wealth needs to be replaced with real wealth based on real values such as education, land, love, happy, healthy children, satisfying jobs, a sense of worth, a healthy environment, and peace. 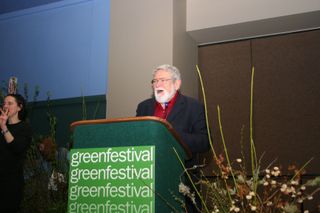 We’ve failed to notice that making money for a few, which is supported by public policy, is destroying the wealth of many, he said. People are losing their jobs and homes while corporate executives get huge bonuses from government bailout money.

The Gross National Product is based on consumption – the faster Americans consume, the faster it grows and the rich become richer. New jobs for all are supposed to occur, in the trickle down effect.

When using GNP to guide the economy, resources are extracted, used up, and disposed of. The country moves into bankruptcy.

What we need instead, Korten said, is to reduce overall consumption and redistribute resources.

“We need to reduce GNP,” he said, adding it’s essential to keeping our nation and species healthy, ending war and converting to peace, changing our economy, getting out of our cars, and going green.

Korten believes we need to set sensible priorities and align our resources accordingly.

The Wall Street economy has disintegrated, and Main Street needs to separate itself from Wall Street with a Declaration of Independence, he said.

Korten would like to see a social credit money system adopted. Money would be issued by the government to serve the public good. This would strip Wall Street money managers of much of their profits.

No bank should be too big to fail, he said, and no bank should be at risk from the failure of others.
Korten believes large, troubled banks should be nationalized, broken into pieces, and sold to local branches, savings and loans, and credit unions.

“There’s nothing exotic about this,” he said, adding, it’s the way banks were organized when we were growing up.

Korten also suggests that hedge funds and huge insurance companies be shut down because they serve no useful purpose.

Korten believes Americans need to begin to have conservations about economic issues and simple living to transform America.

“We have the power to turn the world around for ourselves, our children, and future generations,” Korten said. “You are who you have been waiting for.”