How big are your state’s budget troubles?

Yesterday I commented on an article by U.S. News and World Report that said health care, education, and government are the industries that will be hiring older workers during these recessionary times. 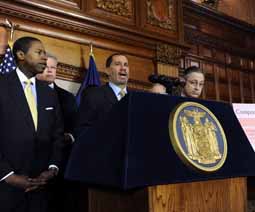 Even after the $135 billion in federal aid gets spent, many states will be having budget problems unless they initiate big spending cuts or tax increases, or both, according to the article "States' Budget Woes Will Outlast the Recession" on msnbc.com.

In the short-term, the stimulus funds will help balance budgets and keep key services, such as Medicare, going. However, the money won't quickly stop high unemployment, low consumer spending, or housing market distress. These factors are causing the nationwide tax-collection shortfall that's expected to continue even after the economy begins to recover, according to the article.

Real Clear Politics offers a list of “Top 10 States in the Biggest Budget Trouble.” They are:

The article, based on information developed by the Center on Budget Policy Priorities and Wall Street Journal, offers information on each state’s deficit and how much economic stimulus money they’ll be receiving from the federal government.

The approval rating for each governor is listed as is whether he or she is up for reelection in 2009 or 2010.

I was surprised that Washington state wasn’t on the list of most budgetary challenged states.

We’ll see as the recession grinds on whether government and education hiring will indeed be a lifesaver for boomers.

Nice new look to your blog, much more fluid and flowing!

Thanks for your feedback on my blog. I also appreciate your suggestion of using more photos. It really helps my blog be more interesting.

Continued good wishes on your http://forestpolicyresearch.org/ blog and your 20-plus posts a day.