When I began blogging for baby boomer consumers in January of 2008, I often thought about boomers as being older.

I’d read that more than one in three baby boomers are grandparents with the average age being 53.
When I wrote about boomers, I talked about their grandchildren rather than their children. 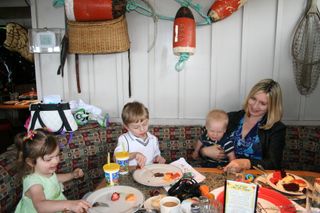 That is, until my baby boomer niece Debra announced she and her husband Lew were expecting a baby. She was age 50 at the time.

Her baby Jackson is here now, and everyone in the family is thrilled. We thought that we wouldn’t be having any more new babies in the family.

The photo is of Debra holding Jackson, who is now 6-months old, at a recent family gathering. With Debra are her nephew Tyler and niece Savannah.

I’m not sure how many boomer moms age 45 to 50 are having babies.

So, baby boomer women having babies, I salute you.

I had my babies at age 25 and 28. It was a thrilling and exhausting experience.

Boomer women who choose to be moms now are made of strong stuff.

As the primary caregiver for my daughter's two-year-old son, I can honestly say I have NO desire to have a child of my own at midlife. Children require lots of time, energy and attention. The LOVE is about the only thing I can give in over abundance! :)

I guess you could say I’ve always been a late bloomer: late 20s when I finally graduated from law school; nearly 30 when I married my husband, Michael; now, my forties for becoming a first-time mom!

Not that we didn’t want or try to have children sooner. We spent the better part of a decade on the emotional roller-coaster ride called infertility treatments, trying every new procedure known to science, with no luck. There we were, two healthy, otherwise happy, successful professionals with everything in the world going for us, except no apparent ability to do what most people simply took for granted: producing children. When I turned forty, we finally gave up. Our 12 year marriage had produced no children. We were empty-nesters who’d never had the privilege of actually experiencing a full nest.

To combat our disappointment over being childless, we made a list of fantasy goals and resolved to accomplish everything on the list. We bought a very kid-unfriendly beach bungalow with magnificent ocean views, but zero backyard; a ridiculously expensive and impractical two-seater sports car; and we began traveling the world.

As near as I can tell, it was probably Paris where we must have conceived. It had been a month of touring the wine regions of France and Italy, number four on our fantasy goal list. The City of Lights was brimming with a spirit of romance, and we were as two young lovers once again.

Back in California, relaxing on the front deck of our home, sipping wine purchased in Tuscany, watching the sun set gloriously into the Pacific, we might have seemed to all the world as possessing the perfect Baby Boomer lifestyle. But it was not what I’d envisioned when we first walked down the aisle all those years ago. I’d thought by now there would be a house filled with kids.

It was a week or so later that I took a home pregnancy test. “I think I might be pregnant,” I told Michael, my tone of indifference reflecting that there was no way the test could be correct. I took a blood test later that same afternoon at a doctor’s office just to prove the home test wrong. A nurse called the next day, “Congratulations! You are pregnant.”

My husband and I spent several moments just looking at one another, mouths agape. The nurse interrupted our telephone silence by suggesting a visit with the doctor the next day, “Just to be absolutely certain.”

The doctor did an ultrasound and pronounced us definitely with child. “A nice strong heartbeat,” he announced. “Wait . . . make that two strong heartbeats!” At that, I burst into uncontrollable tears. My husband felt the need to grab a chair to keep from losing balance and toppling over. “That’s impossible,” I sobbed, “there are no twins in either of our families.”
“Apparently, there are now,” the doctor responded.

Our twins are now two years old. Watching the world anew through their eyes is truly our greatest fantasy goal come true.

Thank you very much for sharing this wonderful boomer story.

My niece and her husband are enjoying Jackson so much.

It's amazing that you have twins. My daughter has twins and they are now 5 1/2 years. Twins are such a special pleasure and challenge.

Do you have a boy and girl or two boys or girls?

P.S. What did you do about your home and sports car? My daughter and her husband had a VW Beetle. They had to sell it and buy a larger car.