Credit card companies are raking in billions of dollars from consumers in raised interest rates and fees.

A bill passed by the Senate today, HR 627, would provide more disclosures and restrict how fees and interest rates could be changed after consumers have obtained credit cards.

Consumer Reports Money blog offers the following summary of the bill’s provisions in the post "Senate Passed Credit Card Reform: What's in It for Consumers":

The American Banking Association doesn’t like some parts of HR 627.

“The goal in the legislation should be to obtain the right balance: providing protections, while maintaining the important role of credit cards in providing loans to consumers and small businesses,” said the association in a statement on the bill. “Unfortunately, we believe the bill does not achieve that balance and will therefore cause an unnecessary decrease in credit availability.

“Most importantly, this bill fundamentally changes the entire business model of credit cards by restricting the ability to price credit for risk. What has been a short-term revolving unsecured loan will now become a medium-term unsecured loan, which is significantly more risky…"

Senator Christopher Dodd, D-Conn., said on his blog that consumers have the right not to be deceived, misled, or ripped off by unfair and arbitrary credit card industry practices that have become commonplace. 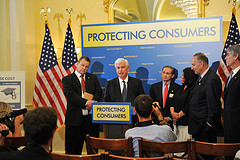 "Unfortunately, as the use of credit cards has soared, so too has the list of predatory practices, hidden fees and sudden interest rate hikes to which the industry has increasingly resorted – 'any time any reason' interest rate increases, 'double cycle billing' that charges interest on balances that the consumer has already paid, deceptive marketing to young people, and skyrocketing penalty interest rates, some as high as 32 percent.

"The industry has profited handsomely; between 2007 and 2008, credit card companies raised interest rates on nearly one out of every four accounts – 70 million cardholders in all who were charged $10 billion in extra interest.

"Put simply, this is an industry that has thrived in part on misleading its customers. Consumers should not have to live in fear that a clause buried in the fine print of their credit card contract might someday be their financial undoing."

In the next step, a compromise bill will be developed with the House, which passed a slightly different bill in April.

Then the compromise bill will go to President Obama for signature. The provisions could go into effect nine months after the president signs it.