Home About Newsletter Categories Donate
The Survive and Thrive Boomer Guide Recall of the Week: Samsung ‘Jitterbug’ cell phones
Will you be growing food this year? 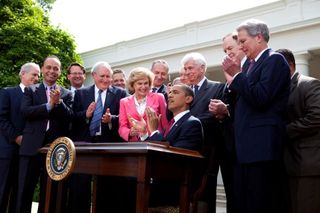 The Federal Reserve has adopted similar protections but its provisions won’t become effective until mid-2010.

At the signing of the bill in the White House Rose Garden, President Obama recounted stories of hard-working people who had problems with credit card issuers, and a number of ways credit card companies take advantage of consumers. Obama described the new rules:

So we’re here to put a change to all that. With this bill, we’re putting in place some common-sense reforms designed to protect consumers like Janet. I want to be clear about this: Credit card companies provide a valuable service; we don’t begrudge them turning a profit. We just want to make sure that they do so while upholding basic standards of fairness, transparency, and accountability. Just as we demand credit card users to act responsibly, we demand that credit card companies act responsibly, too. And that’s not too much to ask.

And that's why, because of this new law, statements will be required to tell credit card holders how long it will take to pay off a balance and what it will cost in interest if they only make the minimum monthly payments. We also put a stop to retroactive rate hikes that appear on a bill suddenly with no rhyme or reason.

Every card company will have to post its credit card agreements online, and we'll monitor those agreements to see if new protections are needed. Consumers will have more time to understand their statements as well: Companies will have to mail them 21 days before payment is due, not 14. And this law ends the practice of shifting payment dates. This always used to bug me… suddenly it was due on the 19th when it had been the 31st.

So we're not going to give people a free pass; we expect consumers to live within their means and pay what they owe. But we also expect financial institutions to act with the same sense of responsibility that the American people aspire to in their own lives.

See "A New Era for Credit Cards" on The White House Blog for a clip of President Obama’s remarks at the signing.

The bulk of the credit card requirements in the new law will go into effect in nine months, which will be February 2010.

The bill calls for phasing in credit card protections, with the earliest provision – giving consumers 45-day advance notice of significant changes in credit card terms – starting 90 days after enactment of the law, which is this fall.

Consumer groups warn consumers to be wary because banks and other credit card issuers may increase fees and interest rates before the law's new requirements take effect.

I guess that gives the credit card companies a year to work the system until the new changes take affect.

Consumers need to beware of sudden changes in the terms of their credit cards. The banks want to make as much money as they can before the laws change.

I like your site so much. In my point of view, there is interesting information, whatever I was looking for. I have been informing to my friends to visit in your blog. Thanks
Sara