Home About Newsletter Categories Donate
How often should you change your bed sheets?
Twins a startling surprise for baby boomer couple

How often should you clean your refrigerator?

One of the most popular articles I’ve written as a consumer journalist was about food storage.

I invited an inspector from the U.S. Food and Drug Administration to examine my family’s cupboards and refrigerator. He then told me what we were doing right and what needed improvement.

My column appeared in The Spokesman (Spokane, Wash.) Review. People talked about it for months. They especially mentioned the refrigerator. I’d had some vegetables from the garden that were dried up and inedible. The newspaper held the article for several months so people thought I’d had the old vegetables in my refrigerator all winter. 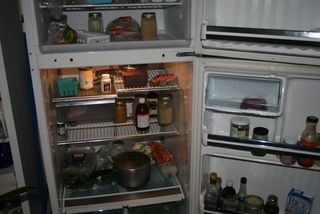 Before the days of frost-free refrigerators, sorting, defrosting, and cleaning the refrigerator was a weekly event.

Now most people either sort it out weekly and wipe up the spills, let it go until company comes and more room is needed, or deal with the bad stuff when it’s spoiled.

A thorough cleaning – defined as emptying out the fridge, cleaning out the interior surfaces, removing the bins and shelves, and washing and drying them – is needed twice a month, recommends Washington State University Extension.

Doing a thorough cleaning twice a month reduces the risk of microbial contamination. The areas showing greatest levels of contamination are the fruit and vegetable bins, the bottom shelf, and the meat bin.

Recent research conducted by Tennessee State University, Kansas State University, and RTI International found that consumers don’t realize that their own refrigerators can contribute to an increased potential for food borne illness occurring in their own home.

WSU Extension also suggests that consumers buy a refrigerator thermometer to they can make sure that the temperature of the refrigerator is below 40 degrees. This prevents microorganisms from rapidly growing and multiplying.

More & more people know that blogs are good for every one where we get lots of information on any topic.

Yes, twice a month to clean the refrigerator. I'm going to have to get going on that one.

People are really interested in this topic, along with how often to change your bed sheets.

While it is always easy to advocate cleaning more often in order to avoid health concerns, has anyone looked at the whole equation?

If you went to cleaning once a month (plus cleanup spills, etc.), you can cut that time by a factor of perhaps 6 (given time for spot cleaning the most egregious mess).

So, what I want to know is, on average, how many people die or suffer from serious life-threatening illness due to cleaning their fridge less often?

If the figure is what I think it is (i.e. pretty darn small), then the advice given is basically suggesting that people sacrifice significant portions of their life to avoid (statistically) losing perhaps 1/100th of that amount.

I find this sort of reasoning rampant when we're given advice about how often to do anything. The experts see the menace to be avoided, and value our time at approximately zero. (Not too surprising - each expert sees the menace that they're worried about as looming very large indeed.)

Thanks for your comment. I think that you're correct in that the problems that can occur from the growth of organisms in the refrigerator are small. However, there is new research that pregnant women are at risk from some bacteria.

I find these blogs very interesting & appreciate the comments of others. I was wondering however, what you did right & wrong according to your expert visitor, as we might be doing the same thing?

Also, what is the best way to clean/disinfect the inside of a refrigerator? I take the shelves & put them through my dishwasher, but the actual surface of the fridge, I wipe with an antibacterial surface spray which is wiped away. Someone told me that it wasn't good for cold environments like the inside of a fridge.

Thanks for your comments.

Wash refrigerator drawers and shelves with hot, soapy water. Let the glass shelves warm up to room temperature before washing with hot water. Don't put these items in the dishwasher.

Use a clean cloth and mild detergent such as dish soap to wash the inside of the refrigerator. Don't use abrasive cleaners.

Use the same method for the freezer, if it has spills.

Wiping up spills as they occur and throwing out old food every week will help keep the refrigerator clean.

I clean mine once a year in the middle of winter so the fridge doesn't lose too much cold (absorb too much heat) when the doors are open.

Seems to be stink free, I don't seem to be sick, although those dandelion greens made me puke, and that popping noise never seems to go away.