Home About Newsletter Categories Donate
How to make a mulberry pie with stevia
What do you think of Wired Magazine’s new rules for the digital age?

Among the 135 animals turned over to state officials Saturday at Connecticut's first exotic animals amnesty day were 15 boa constrictors, 15 pythons, seven alligators, a small monkey, a rattlesnake, and an anaconda.

Most of the animals were exotic reptiles. 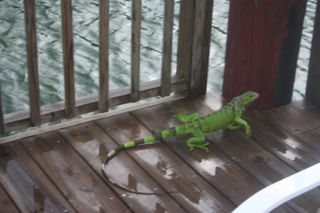 The state Department of Environmental Protection's hosted the event at the zoo in Bridgeport.

Owners didn’t need to give their names, but officials asked about the animals' diets, medical history, and temperament.

The amnesty day was organized five months after a chimpanzee escaped from a private home and mauled a Stamford, Conn. woman.

In Connecticut, it's illegal to own large, potentially dangerous wild animals.

In addition to being dangerous, it's difficult for consumers to care for exotic animals in their homes, and they can escape or be released into the environment where they kill off native species. An example is in Florida where pet pythons have escaped into the Everglades and are taking over the ecosystem. See my article "Don't Buy Exotic Animals for Pets."

The state of Florida has offered five successful exotic animal amnesty days in the past five years.