Are you still taking Celebrex? 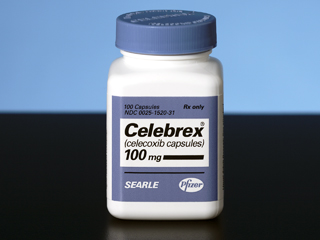 If you're still taking Celebrex – a drug often prescribed for arthritis, menstrual cramps, and acute pain – Consumer Reports thinks there are good reasons to take another look at whether taking the drug is the right choice for you.

Nearly a decade after reports linking celecoxib (Celebrex) to an increased risk of heart attack, and two years after the American Heart Association warned against the drug for people at risk of heart problems, about 11 million prescriptions for it are still filled each year, Consumer Reports said in its article "Should You Still Take Celebrex?"

Why are so many consumers still using Celebrex? It’s being widely promoted by the pharmaceutical company that manufactures it. Consumer Reports states in its article:

Pfizer, maker of celecoxib, has resumed heavily advertising it directly to consumers, spending $54.8 million on ads in 2007 and $58.5 million in 2008. A new ad – a full two minutes long, and also available online at www.celebrex.com/ depicts a man walking a dog and riding a bike. It suggests that the drug is no riskier than other related nonsteroidal anti-inflammatory drugs, such as ibuprofen (Advil and generic) and naproxen (Aleve and generic).

Celecoxib may be appropriate for a small number of patients, according to Consumer Reports, but the consumer magazine has strong reservations about consumers using the drug because:

See the article for details.

If you think you’ve experienced an adverse event with this drug or any drug, especially if it’s of a serious nature, it’s important to (1) tell your doctor immediately and (2) report the event to the Food and Drug Administration via the FDA's MedWatch Web site at http://www.accessdata.fda.gov/scripts/medwatch/medwatch-online.htm or by calling 1-800-FDA-1088.

We are just ordinary people and hoping for a better future for our children's health care system. I hope our president will realize what do we really need and not what their pockets want.

I can't believe that they won't announce information like this on the mainstream media. You have to find out about something that could possibly kill you or a loved one in a roundabout way...

Yes, the news you need to know about prescription drugs often is buried in the news. Going often to the Public Citizen and Consumer Reports Web sites, as well as reading The Survive and Thrive Boomer Guide is a good way to keep up on dangerous prescription drugs.