Home About Newsletter Categories Donate
Are you still taking Celebrex?
Do you remember kindergarten? 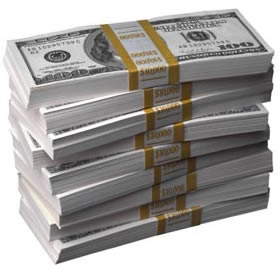 President Barack Obama is proposing that Congress establish a new Consumer Financial Protection Agency to regulate consumer financial products such as credit cards and mortgages, and to simplify disclosure on them.

After the financial mess that was spawned by Wall Street and the banking industry, the new agency is essential for the development and growth of our new economy in the United States.

However, the banking industry is set on killing the proposed new consumer protection agency.

Though virtually every cause of the nation's recent financial crisis was rooted in weak consumer protection, the U.S. Chamber of Commerce is leading the fight against the proposed agency on grounds that it would make credit less available and more costly. The American Bankers Association, the Independent Community Bankers of America, and the Financial Services Roundtable also oppose the measure.

Here’s what’s being spent to defeat the new consumer protection agency, according to the article:

The chamber said it's spending about $2 million on ads, educational efforts, and a grass-roots campaign to kill the agency.

The Center for Responsive Politics said that for the 2010 election cycle, commercial banks have donated almost $3.7 million to lawmakers – 54 percent of it to Republicans. Companies that provide credit have given about $1.4 million, 59 percent to Democrats. Mortgage bankers and brokers have given $581,423.

This massive lobbying effort by banks is unfortunate. Changes are needed to protect American consumers in their financial dealings.

For too long, financial regulators have been too cozy with the financial services industry that they were supposed to be overseeing. Moreover, no single federal agency focuses primarily on consumer protection for credit products.

Lenders have run amok, writing their own rules and creating a maze of unfair and predatory products that have harmed consumers and destabilized the economy. The lack of oversight and regulation, along with Wall Street’s unchecked greed, drove this country into its current financial crisis. Americans deserve an agency that will put their financial well-being ahead of the short-term profits of a few Wall Street banks.

The president’s proposal to create a new Consumer Financial Protection Agency will add much needed oversight of an industry that has run wild at great expense to consumers and homeowners.

Establishing an agency to protect consumers in their financial transactions is essential. Let your senators and representatives in Congress know today that you support this important consumer protection measure.