Home About Newsletter Categories Donate
Injuries up substantially among boomers exercising excessively
What were the best and worst consumer experiences you had this week?

Secure furniture, TVs, and appliances to prevent tip-over injuries and deaths to children 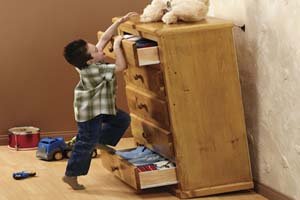 Parents and grandparents need to take simple steps to make sure that furniture, television sets, and appliances are secured to prevent injuries and deaths when these items fall on children.

The U.S. Consumer Product Safety Commission estimates that in 2006, 16,300 children 5 years old and younger were treated in emergency rooms because of injuries associated with television, furniture, and appliance tip-overs. Between 2000 and 2006, the commission received reports of 134 tip-over related deaths.

In addition, there have been at least 30 media reports of tip-over deaths since January 2007 involving this same age group.

"Many parents are unaware of the deadly danger of this hidden hazard," said commission Chairman Inez Tenenbaum in announcing the agency’s tip-over prevention campaign. "I urge parents to include securing televisions, furniture, and appliances in their childproofing efforts. Taking a few moments now can prevent a tip-over tragedy later."

"You may think your home is safe, but everyday things like a television can hurt your child," said Sylvia Santiago, of West Haven, Conn., who lost her two-year old daughter in 2008. "I was right there, and it happened."

Injuries and deaths occur when children climb onto, fall against, or pull themselves up on TV stands, shelves, bookcases, dressers, desks, chests, and appliances. In some cases, televisions placed on top of furniture tip over and cause a child to suffer traumatic and sometimes fatal injuries.

"The most devastating injuries that we see resulting from furniture tipping on children are injuries to the brain and when a child is trapped under a heavy piece of furniture and suffocates," said Gary Smith, MD, DrPH, director of the Center for Injury Research and Policy at Nationwide Children’s Hospital in Columbus, Ohio.

Recent revisions to the voluntary safety standards for clothes storage units provide for the inclusion of warning labels and additional hardware to secure the furniture to the floor or wall, reports the commission.

Furniture should be stable on its own. For added security, anchor chests or dressers, TV stands, bookcases, and entertainment units to the floor or attach them to a wall.

Be sure to add these important steps to your childproofing efforts. It may take an hour or two and cost money for straps and brackets, but it’s worth it to prevent an injury or save a child’s life.