Home About Newsletter Categories Donate
What were your best and worst consumer experiences this week?
‘Capitalism’ the movie calls for consumer action

Recall of the Week: Stork Craft drop-side cribs that can entrap and suffocate infants 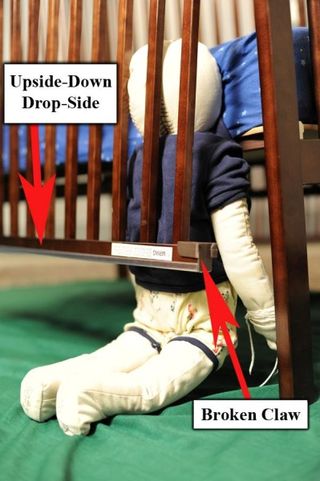 The recall involves about 1.2 million cribs distributed in the United States and nearly 1 million in Canada.

The U.S. Consumer Product Safety Commission urges parents, grandparents, and caregivers to immediately stop using the recalled cribs, wait for the free repair kit, and don’t attempt to fix the cribs without the kit. They should find an alternative, safe sleeping environment for their baby.

Consumers should contact Stork Craft to receive a free repair kit that converts the drop-side on these cribs to a fixed side, the commission advises.

The cribs’ drop-side plastic hardware can break or deform, or parts can fall off. In addition, the drop-side can be installed upside-down, which can result in broken or disengaged plastic parts.

All of these problems can cause the drop-side to detach in one or more corners. When detached, a space is created between the drop-side and the crib mattress. The bodies of infants and toddlers can become entrapped in the space, which can lead to suffocation.

Complete detachment of drop-sides can lead to falls from the crib.

Included in these incidents are 20 falls from cribs; 12 in the U.S. and eight in Canada. Fall injuries ranged from concussion to bumps and bruises.

See the commission’s announcement for information on how to identify the recalled cribs.

Major retailers in the U.S. and Canada sold the recalled cribs including BJ’s Wholesale Club, J.C. Penney, Kmart, Meijer, Sears, USA Baby, and Wal-Mart stores and online at Amazon.com, Babiesrus.com, Costco.com, Target.com, and Walmart.com. The cribs were sold from January 1993 through October 2009 for between $100 and $400.

For additional information, contact Stork Craft toll-free at 877-274-0277 anytime to order the free repair kit, or log on to www.storkcraft.com.

To learn about other recalls, visit www.recalls.gov.