But an overlooked law that authorizes the commissioner of the New York State Department of Environmental Conservation to require household cleaning product manufacturers to disclose their chemical ingredients and information about the health risks they pose was uncovered Keri Powell, an attorney for the public interest law firm Earthjustice. 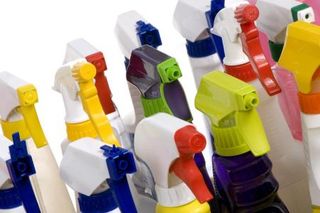 Earlier this month, Keri argued a case before the New York State Supreme Court requesting that manufacturers follow the law.

Some disclosures have already been made as a result of the case. Earthjustice sent letters the manufacturers of cleaners in September 2008 requested that they begin following the law within 30 days or risk possible legal action. The letters prompted some companies, including the manufacturer of Simple Green products, to file disclosure reports for the first time.

In March 2009, SC Johnson announced that it would disclose the chemical ingredients in its products. At the same time, the company launched a What’s Inside Web site that offers a detailed look at the ingredients in SC Johnson's products so consumers “can make the right decisions for your home."

But four companies – Procter & Gamble, Colgate-Palmolive, Church and Dwight, and Reckitt-Benckise – wouldn’t disclose cleaner information. They’re fighting Earthjustice in court to continue to keep the ingredients in their products secret.

The case could have national implications because if companies disclose their chemical ingredients in New York state, they’ll also disclose them in other states.

Earthjustice also is working to reform the Toxic Substances Control Act, the major U.S. law concerned with keeping the public safe from toxic chemicals in commercial products. New federal legislation is needed strengthen the act so that it adequately protects consumers.

It's something that many people don't realize. Consumers need to take action to eliminate these cleaners from their homes. Cleaning with vinegar and soda does a fine job.