Home About Newsletter Categories Donate
Do household cleaners contain ingredients linked to asthma, nerve damage, and other health effects?
How to cook a whole cauliflower

It was heartbreaking to watch parents describe on a TV news program how their child died because he choked on a hot dog.

Any food that has a cylindrical or round shape poses a risk of choking a child. 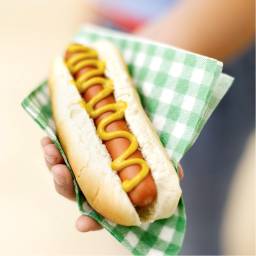 Hot dogs are high on the list of foods that should be redesigned, as are hard candies that would be improved if they were flat rather than round.

Laws and regulations are in place that reduce the choking hazard for children due to toys. However, no similar regulations exist for food.

In addition to calling for the redesign of hot dogs and candy, the American Academy of Pediatrics is recommending that warning labels be placed on food packaging to help curb sometimes-fatal incidents of child choking.

A policy statement from the academy was published in the March issue of Pediatrics.

"I think it's very reasonable to strengthen regulations to prevent choking injuries for children," said Lee Sanders, M.D., associate professor of pediatrics at the University of Miami Miller School of Medicine. "It's a significant public health issue."

The most common cause of death for kids aged 1 to 5 is choking. Hot dogs are a prime offender, making up 17 percent of food-related asphyxiations in children under the age of 10, according to one study.

"It's the right size, right shape,” said Gary Smith, M.D., immediate-past chairman of the academy’s Committee on Injury, Violence, and Poison Prevention, about the hot dog. “It's compressible so it wedges itself in. When they're in that tight [it's] almost impossible, even with the correct training and the correct equipment, to get out. When it's wedged in tightly, that child is going to die."

The academy recommends that the federal government analyze the problem and establish a mandatory system that would require manufacturers to put choking hazard labels on high-risk products and to consider shapes, sizes, and textures when designing products.

It also called on parents, pediatricians, and other health-care workers to pay more attention to the issue.

The U.S. Food and Drug Administration said it would review the recommendations.

However, the Grocery Manufacturers Association’s response was less than enthusiastic, putting an emphasis on the role of parents, teachers, and other child care providers in helping keep kids safe, reports the article “Pediatricians Want Redesign of Hot Dogs, Candy to Curb Kids’ Choking.”