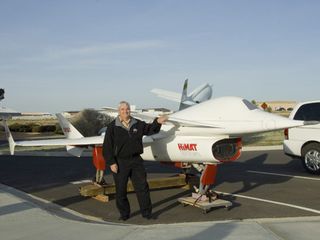 Retiring NASA Dryden Flight Research Center Director Kevin Petersen got an April Fools’ Day surprise when he drove in to work on April 1 – the HiMAT remotely piloted research aircraft sitting in his parking space in front of Dryden's main building.

Most people will laugh at a funny April Fools’ Day joke. However, it’s important to use good judgment and not go off the deep end when carrying out a prank, especially at work.

RISMedia offers these tips on what not to do on April Fools’ Day:

1. Avoid pranks that would cause someone emotional or physical harm.

2. Don’t initiate a joke that would cause people to panic, such as pulling the fire alarm.

4. Don’t embarrass anyone or launch a joke that would hurt a person’s reputation.

6. Don’t replace the water cooler water with vodka or another type of alcohol.

7. Don’t experiment with potentially hazardous materials on others.

8. Don’t tell your co-workers there’re cookies in the break room when there aren’t.

9. Don’t turn in your resignation letter as a joke.

10. Don’t change a colleague’s screen saver to a pornographic image when he has stepped away from his desk.

RISMedia’s article “The Do’s and Don’ts of April Fools’ Day” also provides suggestions on modifying some of the ideas above so they would be acceptable in the workplace.

See also “The Top 10 Worst April Food’s Day Hoaxes Ever” for more information on what not to do on April Fools’ Day.

Read The Huffington Post’s “The History of April Fools’ Day Plus the Top Five Pranks of All Time” for their ranking of the best April 1 jokes ever.

No matter your fooling style, one thing is for sure: the good-natured pranks of the day bring out the kid in all of us, regardless of age.