Looking for an exciting get-away for the upcoming Memorial Day weekend?

Here are 10 destinations that are sure to please baby boomer consumers: 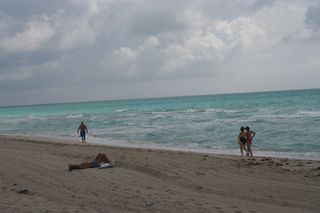 Miami hosts a big party on its beaches and in the city for Memorial Day. Some of the hottest names in hip-hop and R&B will be there. Whether you’re into reggae or rap, there are plenty of things to do in Miami. You might even see some celebrities. The weather’s terrific, but you could run into some seasonal rains.

Fleet Week brings hundreds of sailors and Marines to the city to participate in Memorial Day parades. Along with parades and visiting ships, other New York City delights range from picnicking among the greenery of Central Park and al fresco activities such as sidewalk dining, street fairs, rooftop drinks, and river cruises, many with spectacular city vistas. And, for first-time visitors, standing at the feet of Lady Liberty or seeing the Empire State Building lit up in red, white, and blue are great ways to celebrate Memorial Day.

The nation’s capital will host a Memorial Day Parade. You can visit The Tomb of the Unknown Soldier, where Vice President Joe Biden and Dr. Jill Biden will lay a wreath. Special services will also be held at other memorials and cemeteries.

President Barack Obama will lay the wreath at the Chicago Memorial Day Wreath Laying Ceremony and Parade on Saturday, May 29. The Chicago parade is considered one of the largest Memorial Day parades in the nation.

At the Seattle Center, you’ll find the Northwest Folklife Festival, a celebration of the art and culture of the Pacific Northwest. Enjoying a walk around Green Lake, riding on a Washington state ferry, and eating on one of the Emerald City’s great restaurants are other delights.

San Francisco events include a Memorial Day Parade at the Presidio and a formal ceremony on the Monday of the weekend. At San Francisco's WWII submarine, the USS Pampanito on Fisherman's Wharf, a ceremony will be held to remember veterans and boats lost at war, with bell tolls and bagpipes. On the USS Hornet, a memorial ceremony and tours of the ship are available. Other activities during the weekend are a free opera in Dolores Park; Civil War battles and encampment; and Caribbean-themed Carnaval San Francisco Festival and Grand Parade.

Charleston, S.C., the history-rich capital of the Old South, is a good place to remember those lost in wars. Saturated with history, this city's streets are lined with preserved architectural features, such as plantations and stately homes, hundreds of which were built prior to 1850 — 70 date back to the pre-Revolutionary War era. You can hire a horse-and-carriage for a tour of the historic cityscape via the cobblestone streets.

In addition to learning about Palm Spring’s glamorous past, you can enjoy desert vistas, canyon tours, and hikes. The weather’s great now, so Memorial Day is an excellent time to visit before it gets too hot.

Designated as the nation’s first national park in 1872, this vast preserve of wilderness and wildlife is the perfect place to enjoy a Memorial Day getaway. Located in Wyoming, Montana and Idaho, it’s home to a large variety of wildlife including grizzly bears, wolves, bison, and elk. Preserved within Yellowstone National Park are Old Faithful and a collection of the world's most extraordinary geysers and hot springs, and the Grand Canyon of the Yellowstone.

Boston’s historic sites are always inspiring, and Memorial Day is no exception. Because of the city's prominent role in the American Revolution, several historic sites relating to that period are preserved as part of the Boston National Historical Park. Many are found along the Freedom Trail, which is marked by a red line of bricks embedded in the ground. The city is also home to several prominent art museums, including the Museum of Fine Arts and the Isabella Stewart Gardner Museum. The University of Massachusetts campus at Columbia Point houses the John F. Kennedy Library. After enjoying Boston’s historical treasures, you can enjoy its fine restaurants and musical opportunities.

Good picks, but if it was up to me, i would add to this list places such as Paris, London, Bombay and so on. Memorial day is a great time to go abroad and have a short vacation.

The post is about places to travel in the United States. Yes, Paris, London, and Bombay are great places to travel. But, most baby boomers wouldn't be able to afford a short vacation on Memorial Day to places so far away. They'd make these trips when they had a longer vacation planned.

Thanks for your time and effort to provide this vital information. I appreciate what you are trying to emphasize.

Well, nothing like the Windy city on Memorial Day. All the eyes of the states right now are on Chicago. Well, it's either Chicago or Hawaii. Setting the famous resident aside, Chicago seems like an ideal choice for me at that time. The current government has broken a lot of ground recently, the first of every first has happened. So it would seem great to visit the origin. Moving on, I can't argue with the rest on your list. Yellow Stone Park, well, temperature has been a bit humid, but it could be a great idea to bring the kids there though. Might be fun.

All these places seems great to go. personally i love going to Miami and spend some fun time with my family on the beaches.