How to prune rhododendrons

I had two indications it was time to do some serious pruning on my 40 rhododendrons.

First, a friend, who came to cut some flowers for a pink tea, told me they needed work, and I should at least remove the dead branches. 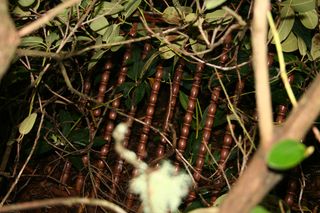 Second, when I walked in my front yard where I have about 20 rhododendrons growing under big fir trees, I found this railing or gate that someone had disposed of. The rhododendrons were growing together so thickly that I didn’t see it.

I’ve done a significant amount of pruning in the last couple of weeks.

Here are my top 10 tips for pruning rhododendrons:

1. Start early. Prune just after blooming or when buds start to become active. Rhododendrons don’t like to be pruned in hot weather. In my experience, they droop if pruned when it’s hot. 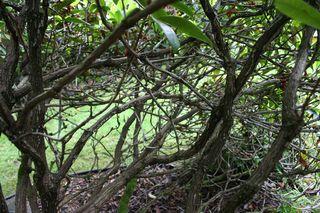 2. Remove dead, dying, or diseased branches any time. Cut back flush with the main branch or trunk.

3. Make spaces between your rhododendrons, if you have large ones that are growing together. You need to be able to walk around them to take care of them.

4. Prune the plants so that they don’t touch the house or fence. 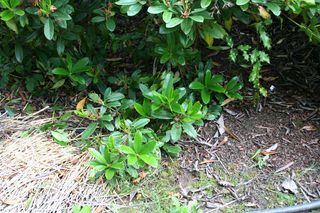 5. Trim off any branches that are dragging on the ground. 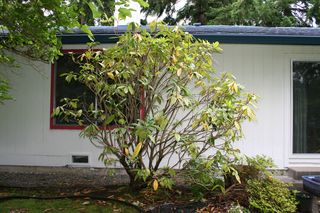 6. Try to shape your plants and remove branches that are crisscrossing each other. Since I’ve just been trimming between them and keeping them away from the house and fence for about the last five years, I have branches growing every which way in a lot of my rhododendrons. Many of my plants were oval shaped. When discussing pruning our rhododendrons, another friend said she tries to give hers a fountain shape. This one, shown above, achieves that goal. 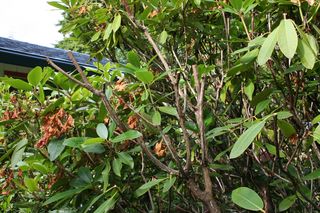 7. Get out your ladder, if your rhododendrons are getting too large. Two years ago, my friend pruned some plants for me after he cut down several diseased trees. He opened them up at the top so sunlight can get down through the plant. That’s what I tried this year. I like my rhododendrons nice and thick at the top, but that doesn’t work well because they develop diseases. 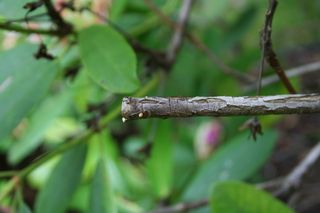 8. Cut branches off just before the last leaves on the branch or just before a tiny green growth bud. 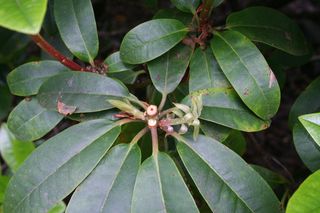 9. Deadhead or remove the old, dying blossoms as you prune. Be careful not to remove the emerging new growth under them. 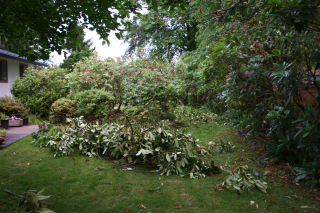 10. Don’t worry if you’re cutting back your plants severely. However, it will be a year before the plant has much foliage and two or more years before they have flowers. The photo above shows large rhododendrons that I pruned significantly, with the cuttings piled up in front of them.