What’s the real problem with the economy in Greece? 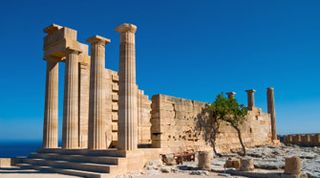 When the media reports came bursting forth about the troubles in the Greek economy, I wondered how better than average social programs could cause the downfall of a country.

While overspending by the government on social programs may have caused some of the countries economic difficulties, the Greek crisis essentially comes from the same frenzied drive of finance capital to draw profits from the massive indiscriminate extension of credit that led to the implosion of Wall Street.

That’s the opinion of Walden Bello, a contributing editor for Yes! Magazine, in the article “Greek Mythology: The Real Story of the European Debt Crisis.”

In the article, Bello says:

Periods of frenzied speculative lending are inexorably followed by government or sovereign debt defaults, or near defaults. Like the Third World debt crisis of the early 1980s and the Asian financial crisis of the late 1990s, the so-called sovereign debt problem of countries like Greece, Europe, Spain, and Portugal is principally a supply-driven crisis, not a demand-driven one.

Wall Street powerhouse Goldman Sachs showed Greek financial authorities how financial instruments known as derivatives could be used to make large chunks of Greek debt ‘disappear,’ thus making the national accounts look good to bankers eager to lend more. Then the very same agency turned around, and, through a kind of derivatives trading known as ‘credit default swaps,’ bet on the possibility that Greece would default, raising the country’s cost of borrowing from the banks but making a tidy profit for itself.

If ever there was a crisis created by global finance, Greece is suffering from it right now, he says.

Take a look at Bello’s article for more information on the growing financial crisis in Europe. It's fascinating reading.