Home About Newsletter Categories Donate
Recall of the Week: Massive egg recall due to possible Salmonella contamination – Be sure to check your eggs
Scrape plates with leftovers and grease in garbage can, not sink

Cruise ships contributing to degradation of ocean, other waterways 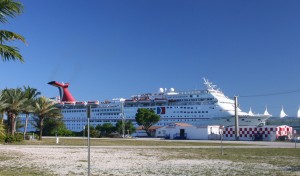 In the article, "Big Cruise Ships Pollute Big Time and Can Sail Away From Regulation," the Seattle Post-Intelligencer lays out the problems cruise ships are causing in the Pacific Northwest.

In a single day, the U.S. Environmental Protection Agency estimates passengers aboard a typical cruise ship will generate:

Cruise ships incinerate 75 to 85 percent of their garbage, the EPA found in a 2008 study.

That contributes to smog in coastal communities and on the ocean. Ships also release incinerator ash and sewage sludge – blobs of concentrated toxins from the bottom of waste-treatment facilities – into the ocean, the article reports.

Cruise ships contribute nutrients, metals, ammonia, pharmaceutical waste, chemical cleaners, and detergent to deep marine environments from sewage-treatment systems that either don't work as planned or aren't able to remove such substances, according to tests in Washington and Alaska, interviews with state officials, the EPA study, and information provided by the Olympic Coast National Marine Sanctuary.

It's legal to discharge untreated sewage in most areas of the United States farther than three miles from shore, according to the article.

Cruise ships burn fuel, much of it a cheap grade, which will continue until new international fuel standards take effect in 2012. A 2005 study done by WashPIRG, a public interest advocacy group based in Washington, estimates that in a single day a cruise ship carrying 3,000 passengers and crew generates the air pollution equivalent of more than 12,000 cars.

In addition, many cruise ships dump their wastes in Canadian waters where the regulations are weaker.

What can be done to control pollution from cruise ships?

Federal legislation, sponsored by Seattle Congressman Jim McDermott and Sen. Dick Durbin of Illinois, whose state borders the Great Lakes cruising Mecca, aims to amend the Clean Water Act to prohibit cruise ship discharge of sewage, oily bilge water and graywater within 12 miles of the United States coast and set new standards on discharges within 200 miles of the coast, the article reports. It would also prohibit dumping of incinerator ash, sewage sludge, and hazardous waste within 200 miles of the coast, instead calling for land-based disposal.

Be sure to take a look at this in-depth article on cruise ship pollution. It’s discouraging to learn that such big-name companies are consistently evading environmental laws.