Home About Newsletter Categories Donate
What were your best and worst consumer experiences this week?
Cruise ships contributing to degradation of ocean, other waterways

Recall of the Week: Massive egg recall due to possible Salmonella contamination – Be sure to check your eggs 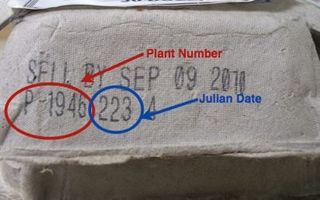 More than a half billion shell eggs have now been recalled, with a second Iowa firm announcing on Friday the recall of 170 million eggs after tests confirmed the presence of Salmonella.

The eggs, in various-size cartons and cases, are distributed under the following brand names: Hillandale Farms, Sunny Farms, and Sunny Meadow.

The recall involves eggs with plant numbers P1860 or P1663 and Julian dates as follows:

The Egg Center, a trade group, offers this information on how to check your eggs:

Dates and codes can be found stamped on the end of the egg carton or printed on the case label. However, not all affected brands will be printed in the same order. Typically, the plant number begins with the letter P and then the number. In most cases, the Julian date follows the plant number, for example: P-1720 223.

If your carton has a combination of numbers that matches the affected plant number AND Julian date, your eggs are affected in the recall. Using the example above, P-1720 223 may appear on some cartons as 223 #1720, 1720 223, or other variations. It is important to note that both the plant number and Julian date must match.

Check the Egg Center’s website for a listing of the plant and Julian numbers in all the recent egg recalls.

Consumers who find that they've purchased recalled eggs should return to the store for a refund.

Since May 2010, a four-fold increase in the number of cases of Salmonella Enteritidis infections has occurred.

See the U.S. Food and Drug Administration’s "Salmonella" and "Playing It Safe With Eggs: What Consumers Need to Know" for information on the symptoms of Salmonella infection and how to properly handle and store eggs.