Home About Newsletter Categories Donate
Cruise ships contributing to degradation of ocean, other waterways
What were your best and worst consumer experiences this week?

Scrape plates with leftovers and grease in garbage can, not sink

Seattle and other cities are experiencing problems with grease from households and restaurants collecting in sewer pipes and causing backups. 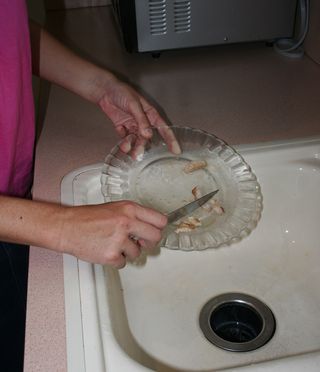 Part of the problem is what consumers scrape off their dishes. If you don't thoroughly scrape the grease and other stuff into the trash or a food recycling bin, it rinses off in a scalding dishwash and accumulates in a city's pipes.

There, it cools down, solidifies, and sticks to the pipes, forming a rock-hard substance.

In the last five years, grease-clogged pipes caused about one-third of Seattle's sewer backups, according to Seattle Post-Intelligencer’s article "Seattle’s Sewers Getting Clogged With Grease." There were 147 backups between 2003 and 2009, but those figures don’t include the times when residents called Seattle Public Utilities and found out the blockage was in the side sewer on their property.

These backups are of concern to consumers, too. Most cities charge homeowners to clear backups that occur in the side sewer.

Here are tips to avoid adding fat and grease to city sewers: