Home About Newsletter Categories Donate
How can you tell if modeling agency is a scam?
FTC taking action against debt consolidation scammers

What's not to like about better health care coverage for America?

Despite the negativity by some, there’s no doubt about it. Tomorrow, six months after the passage of the landmark health-care overhaul law in America, health care coverage will improve. 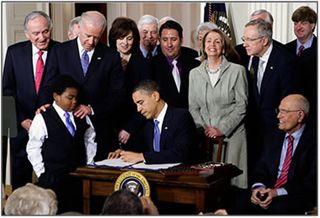 Provisions that go into effect include a cap on lifetime limits on the insured and requirements that insurers fully cover children with preexisting conditions and allow dependents to stay on their parents' insurance until age 26.

‘I said, 'Wow,’ something affected me personally from the government. ... It's really made our lives so much less stressful.’

Convinced that she would have to tap the savings she and her husband had amassed for their two sons' college tuition, O'Brien said she was elated to learn that she could instead apply to one of the new state-based ‘high risk’ pools the law recently established for people with pre-existing conditions recently established by the law.

‘You don't know how this has changed my life,’ said O'Brien, who wore a blue scarf to cover the hair she has lost through her cancer treatments. ‘I personally thank you President Obama, so much.’

So, congratulations to lawmakers who finally passed something to help consumers in the country. While the new law doesn’t go far enough, it is, at least, a beginning, and will be helpful to consumers, such as Josephon and O’Brien.