Home About Newsletter Categories Donate
Top 10 tips for Thanksgiving Day 2010
Whether you shop Black Friday or use the Internet, be sure to compare prices

Is cancer a man-made disease? 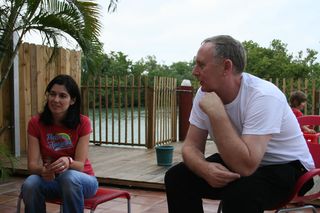 The death of another friend from cancer reminded me of an article I read recently.

The article said cancer was extremely rare in ancient times so it has to be a man-made disease caused by pollution and changes to our diet and lifestyle. The conclusion is from of a team of researchers from Manchester University who looked into medical literature from the past and examined remains for signs of the disease.

They pieced together the development of cancer over the last 3,000 years, reports the Organic Consumers Association’s article “Cancer Is a Man-Made Disease, Research Concludes.”

It’s so frustrating to have watched the “War on Cancer” for 50 years. Billions have been spent and are being spent looking for the “cure.”

Since the 1970s, I’ve been writing about the link between chemicals and radiation and the development of cancer. Significant evidence is emerging. More groups are reporting it. See the Breast Cancer Fund’s “New Report Catalogues Chemical and Radiation Links to Breast Cancer.”

However, the public policy doesn’t change. Thousands of chemicals are allowed to be dumped into our food and consumer products and onto the land and crops. Money is made that way, which seems more important than the health of people.

I think about this when a friend or relative is diagnosed with cancer or dies from it. I wish things would change.

My friend Chris Slingsby died Nov. 17. That’s a photo of Chris above, with my daughter.

I met him when I traveled to England in 1993 and wrote to all the Slingsby’s I could find in the London phone book. Slingsby is my maiden name. I wanted to learn about the history of the Slingsbys, a famous English family. Chris helped.

Chris became a good friend. He moved to the United States a few years after I met him. He was good about coming to visit my daughters and me. Chris was charming and had a good sense of humor.

Chris had cancer of the endocrine system. I talked to him before he returned to London for treatment. He said he wanted to beat the disease and live. He asked for my prayers.

My father, Minor H. Slingsby, died of non-Hodgkin’s lymphoma, linked to pesticide exposure. He was a farmer. Although he had longevity in his family, he died at age 80. Most of his older brothers and sisters outlived him.

So we lose the people we love from cancer in a world dominated by modern chemistry. And the industrial machine grinds on and doesn’t notice.