Facts and figures for the 2010 holiday season

U.S. consumers plan to spend an average of $688.87 on holiday-related shopping, a slight rise from last year’s $681.83, according to National Retail Federation. 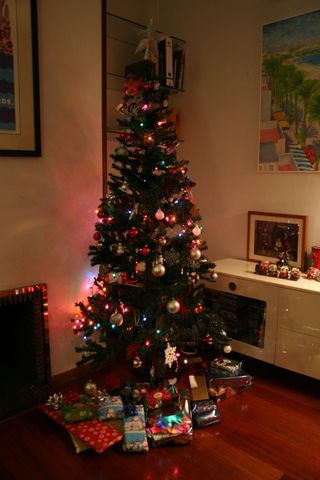 The U.S. Census Bureau offers the following holiday-related facts and figures from its data collection:

The percentage of total 2009 sales for department stores in December. For jewelry stores, the percentage was 21 percent.

Value of retail sales by electronic shopping and mail-order houses in December 2009 – the highest total for any month last year.

The value of U.S. toy imports including stuffed toys and dolls, puzzles, and electric trains from China between January and August 2010. China was the leading country of origin for stuffed toys coming into this country, as well as for other popular holiday gifts. These include roller skates, $37 million; sports footwear, $218 million; and basketballs, $32 million. China leads Thailand as the leading supplier of ice skates, $9 million versus $6 million, with Canada ranking third with $4 million.

I love that Christmas Tree. :) Beautiful.