Home About Newsletter Categories Donate
Recall of the Week: Frontgate Closet Ladders due to fall hazard
How to store eggs

Obama’s State of the Union speech a disappointment for consumers 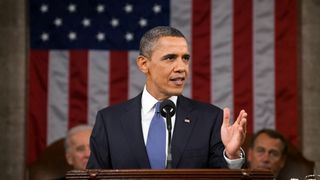 While eloquently worded with lofty ideas on how America can regain its greatness, President Obama’s State of the Union speech was a big disappointment for the consumers of America.

Reflecting the shellacking the Democrats took in the 2010 mid-term elections, Obama embraced conservative ideas that will hurt consumers. Most notable among them are limiting the amount of money consumers can sue for, reducing Medicare and Medicaid benefits, restructuring Social Security, and amending the health care reform law.

But perhaps the most notable omission for consumers in Obama’s address was the lack of the help for homeowners facing foreclosures. The banking industry and Wall Street giants have been bailed out and are making billions again.

But banks are dragging their feet in working with homeowners who want reduced payments or to negotiate a short sale. They’re insisting that consumers pay the inflated mortgagees that led to the housing bubble and the collapse of the economy.

Obama, reeling from the November election, is embracing cutting government regulations and reducing the size of the federal government – both big items on the conservative agenda.

These actions can lead to disaster. The BP oil spill showed America what a weak government agency and lack of regulations can do.

However, his move to the right to appease conservative voters that he showed in tonight’s speech could lead to policies that hurt consumers, especially baby boomers who are preparing for retirement.

Let’s hope that this flowery speech was the best Obama and his advisers could come up with and that he’ll remember the needs of consumers, using the power of his veto pen to beat back ill-advised conservative legislation.

Well, as the saying goes, we really can't please everybody. Obama's speech for the Union have raised eyebrows of many consumers. They wanted a policy that has to be more consumer oriented and look after their welfare. This is not the first time that proposals are consumers' welfare focused. This is a dismay but we have to deal with it.

Banks drag their feet to work with owners who want lower payments or to negotiate a short sale.