I started out by seeing all the movies that received Oscar nominations that were still playing in theaters. This week, I saw one on Comcast On Demand and rented three from Safeway and four from Blockbuster.

I’m glad that’s over for another year. However, when I watched the Academy Awards tonight, the documentaries looked interesting, especially “Inside Job,” about the recent economic collapse. I’ll have to look for it. It looks like a good movie for consumers.

My worst: Cranky people when I returned from my Sacramento trip 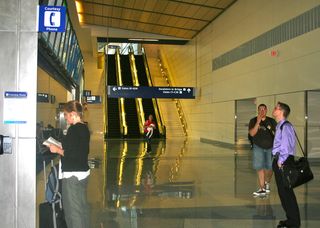 When I getting my items ready to go through the scanner in Sacramento, two Gen Y women crowded ahead of me. They didn’t reply when I suggested to them it would have been polite to at least ask if they could go ahead.

At the Seattle-Tacoma airport, a Gen X woman hit my arm as she crowded to get by as I was walking near the baggage carousel. When I said “Ouch,” to let her know that I’d noticed she’d hit me, she rudely replied, “If that hurt, you shouldn’t be walking around an airport.”

It would have been nice to have received a simple apology.