Home About Newsletter Categories Donate
Health care reform now one year old, but action is needed so progress isn’t lost
What were your best and worst consumer experiences this week?

Parents and grandparents: Are your poisons and medications locked up?

A 12-month-old boy sucked on the wick from an oil lamp. Immediately, he began choking and his lips started turning blue. The ambulance dispatcher and poison center worked together to be sure the youngster was treated appropriately. After an overnight stay in the hospital, he was able to go home. He was lucky; other children who choked on lamp oil have suffered life-threatening lung injuries or even died.

The message? Poisons need to be locked up where children can’t see or reach them. Other types of products that can cause life-threatening lung injuries include gasoline, kerosene, tiki torch fuel, furniture polish, lighter fluid, and baby oil.

A 3-year old visiting from out of town swallowed some of granddad’s Viagra pills. They were left on the bedside table. Instead of flying home that day, the child spent the afternoon in the emergency room to have her blood pressure monitored.

The message? All medicines must be locked up, out of sight and reach of children. This is true in children’s own homes and every home where children visit.

A 2-year-old daughter was at a friend’s house. Several mothers there were babysitting so the other moms could run errands. The child got into one mother’s purse and swallowed adult prescription drugs. They were in a non-child resistant bottle. They weren’t sure exactly which of a mix of drugs in the bottle the girl had ingested. The mothers were on the phone with Poison Control when the mom returned. A Poison Control representative told the mom to get her child to the hospital immediately. The girl had to have an EKG and drink a dark, charcoal-like substance. After a few hours of observation, she was released.

The message? If you carry medications around in your purse, put it out of reach, like on top of the refrigerator, where young children can’t get to it. About half of the accidental poisonings occur in children under age six.

Most children who swallow poisons or medicines can be managed safely at home if the poison center is contacted right away, Rose Ann G. Soloway, R.N., clinical toxicologist for the National Capital Poison Center in Washington, D.C., told me in an e-mail. To reach your local poison control center call 800-222-1222.

“Just this week, I’ve taken calls about children who swallowed too much cough medicine, bit into glow sticks, drank medicated shampoo, swallowed a sibling’s prescription medicine, and ate batteries from a toy, among many others,” Soloway said. “Parents who confused medication schedules and double-dosed a child and parents who used the wrong type of measuring device also called.” 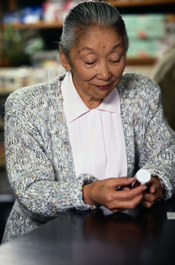 All of these children were able to stay at home with poison center guidance. This saves anxiety, time, and money compared to calling 911 or going to an emergency room, she said.

This week is National Poison Prevention Week. Celebrate it by locking up your prescription drugs, over-the-counter medications, pesticides, household cleaners, and other poisons. It could save your child or grandchild’s life – and save you the heartache of being the one responsible for the injury of death of a child you love dearly.