Home About Newsletter Categories Donate
Watch out for fake e-mails saying they’re from the FDIC
Fireworks large and small can cause devastating injuries, death

Yesterday, new crib standards went into effect that will help protect children from injuries and death. 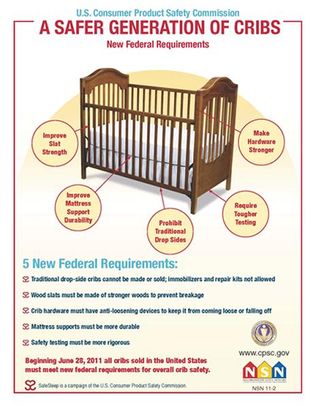 Among the new rules for cribs are:

"From the start, our goal has been to prevent deaths and injuries to babies in cribs, and now the day has come where only stronger and safer cribs are available for consumers to purchase," Inez Tenenbaum, chair of the commission, said in a statement.

The commission has recalled more than 11 million dangerous cribs since 2007.

Drop-side cribs with detaching side rails were associated with at least 32 infant suffocation and strangulation deaths since 2000, according to the commission. Additional deaths have occurred due to faulty or defective crib hardware.

However, a study by the Nationwide Children’s Hospital showed 9,500 children were treated at emergency rooms each year for crib-related injuries from 1990 to 2008. More than 100 died every year.

The new standards aim to prevent these tragedies and keep children safer in their cribs.

Beginning December 28, 2012, child care facilities, including family child care homes and infant Head Start centers, as well as places of public accommodation, such as hotels and motels, and rental companies, will be required to use cribs that comply with the new crib standards.

A 2008 law required the commission to update crib standards, which haven’t undergone a major revision for 30 years.

This will surely make all baby cribs much safer. Less worries to us parents knowing that the crib that we bought, has pass this standards.