Home About Newsletter Categories Donate
What was your best and worst consumer experience this week?
Mad at Netflix? Try these seven alternatives

Recall of the Week: Chefmate Blender due to laceration hazard 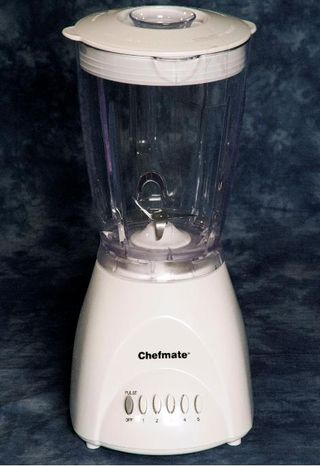 Target and the U.S. Consumer Product Safety Commission have received 11 reports of the blade assembly separating from the pitcher, seven of which reported serious lacerations to consumers’ fingers and hands, Target and the commission said in a joint statement.

The recall affects all Chefmate 6-Speed Blenders, model BL-10. The model number is located on the bottom of the base.

The blender consists of a six-inch tall, white electrical base with five, white speed-selector buttons labeled 1 through 5, one gray button labeled “Pulse/Off,” and the word “Chefmate” in black letters on the front; a clear plastic pitcher with a handle with U.S. and metric volume measurement markings; a white plastic lid with a removable clear plastic lid stopper; and a white plastic blade assembly with two angled, stainless steel blades.

Manufactured in China by Select Brands, the blenders were sold only at Target stores nationwide from September 2007 to February 2011 for about $14.

Consumers should immediately stop using the blenders and return them to any Target store to receive a full refund, Target and the commission advise.

For additional information, contact Target Guest Relations at 800-440-0680 between 7 a.m. and 6 p.m. CT Monday through Friday, or visit their website at www.target.com.