Home About Newsletter Categories Donate
Tips for keeping pets safe on Halloween
Recall of the Week: Big Lots recalling Glider Recliners with Ottomans due to entrapment and finger crushing hazards

My best: Getting my fence painted before the heavy rains started 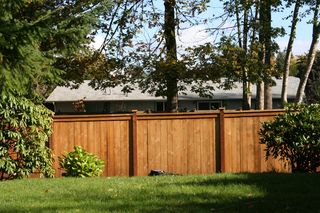 I wanted the contractor who helps me with home repairs to stain my fence and paint the eves and the back of the house.

He said he’d get back to me with an estimate, but as the nice, hot days of August rolled by, he didn’t follow through.

Instead, I selected another firm. I wasn’t sure what kind of stain to use, so I had three painters come to the house to give me a bid. I had difficulty choosing among them. The company with one of the lowest bid couldn’t do the fence spring.

I remembered the name of a painting company I’d hired about six years ago to paint three sides of my house. The firm did a satisfactory job, so I hired them.

Luckily, the weather forecast indicated we’d have five days of sun. The fence dried out, and the workers were able to stain it. They did the eves and the back of the house, too.

I’m glad my fence was stained this fall. It was beginning to grow moss in places and had areas of mildew growth.

Since paint fumes make me sick, I didn’t watch the workers as they cleaned my fence and stained it.

Since I had a meeting at 2 p.m., I couldn’t check the fence with them when they’d finished. When I looked at it, I found dirt on the bottom board of the backside of the fence in the backyard. And, there were two bricks sitting against the fence, indicating that the workers hadn’t stained the fence there. In addition, in two dozen places, stain streaks were running down the fence.

I left a message for the owner. He came the next day and cleaned the back of the fence and stained it. He also tried to fix some of the streaked areas, but said too much bleach caused a few of them.

The owner helped the young worker who painted the eves and the back of the house. The job was satisfactory.

I also had problems with young, inexperienced workers when my roof was installed. One of them broke a window when a ladder slipped. He also was rude to me when I told him to clean the grass and slugs off the metal panels before they were installed on my home. He told me to do it myself.

I’d like to be able to hire workers for jobs that I need to have done on my home that are experienced enough to do a good job.

You're right, sometimes construction workers can be rude and a pain in the you-know-what. When I was doing my apprenticeship to be a plumber, I worked for Roter Rooter, and they spent as much time teaching customer satisfaction techniques, as they did technical plumbing know-how. (I now do roofing as well as plumbing, siding, windows etc...)

Here are a few things I learned from working at Roter Rooter that have stood me in good stead over the years, and kept my family fed.

1- Be there when you say you're going to be there.

2- Clean up any mess you make better than when you found it. (we wore booties in the house to reduce mess to customer's floors.)

3- Get the job done to the customer's satisfaction, and when you say you're going to get it done. They will send you more customers, even if you end up losing money on their job, you will make it up by making them happy and asking for referrals...

Just my two cents... Thanks!

I'm a construction worker, and I've had to deal with my fair share of rudeness over the years, both from my bosses, customers and other workers. The biggest problem with your run of the mill construction worker is that they have a strong back and a week mind. Lots of them have the vocabulary of a dock worker, without the creativity to get past the "F" word. LOL

Also, lots of the young guys have way the heck too much testosterone, without the self control to manage it, and they take offense at just about anything that's said to them. There's also lots of drug use and alcohol abuse with some of these guys. (I'm not really making excuses here, just explaining...)

I hope your next run in with construction workers is better that the one with your broken window.

Thank you for your comments letting me know that there are construction workers who have training in customer service and care about their work.

There are still construction worker who are customer oriented and polite. But I agree that not all of us in the construction industry still give trainings to their workers. Just look for companies who value their clients more than anything else.