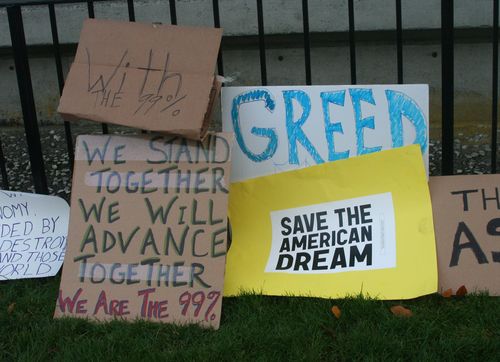 In the three plus years I’ve been writing consumer blogs, I complained about how consumer news isn’t covered at all in the top news stories of the year.

While, again, there weren’t many stories on leading consumer stories of the year, with “Consumer Protection Made Big Gains in 2011” by David Lazarus of the Los Angeles Times a notable exception, consumer news was so big this year, it made many top 10 lists.

These are the top stories, in my opinion, that are important to American consumers in 2011:

The Occupy Wall Street demonstrations brought the nation’s attention to consumer issues in ways that haven’t been seen since the 1960s and the Great Depression. The increasing division between the haves – the 1 percent – and the rest of us – the 99 percent – was a clear part of protesters message. It’s great that consumers are taking action to make their voices heard. This is serious consumer power.

2. Congress fails to lead due to right wing machinations

It’s hard to remember a time when the political contentiousness in Congress has so hurt the American consumer. Time after time, Republicans blocked important consumer measures, fueled by the anti-government Tea Party movement.

For baby boomers who have just seen their retirement funds recovering, the wild swings in the stock market brought about by congressional inaction, such as a dragged out process to increase the debt limit, were troubling.

Hopefully, 2012 will bring an end to such divisive partisan bickering that is harming the American consumer.

During 2011, the amount of money college students owe for their college debts grew to exceed the amount of the nation’s credit card debt.

The amount of student loans taken out last year was more than $100 billion, and total loans outstanding will exceed $1 trillion for the first time this year.

The average student debt for 2011 college graduates is $22,900, according to The Wall Street Journal article “Number of the Week: Class of 2011 Most Indebted Ever.”

The economy this year grew at an unimpressive rate of 1.8 percent. For those out of work or underemployed, the job situation is grim.

A number of banks introduced a debit card fee of $3 to $5 each month that the debit card was used for a purchase. But consumers rebelled when Bank of America added a $5 fee in September. Some consumers declared a Bank Transfer Day on Nov. 5, switching their money to not-for-profit credit unions. Banks backed down and dropped the fee at the end of October.

A big consumer breakthrough this year was the establishment in July of the Consumer Financial Protection Bureau. The agency keeps a closer watch on credit card issuers, mortgage lenders, payday loan companies, and other businesses with a direct effect on people's financial lives.

Because banks and other firms fought against the agency every step of the way, the mere fact that it's up and running is a major accomplishment, says Lazarus. But Republican lawmakers are blocking appointment of a director until they can water down the agency's leadership structure and have more say over its finances.

The Fukushima Daiichi nuclear disaster in March shows how lax the nuclear industry is in designing plants and their placements. The good news is that many countries are backing away from their heavy investment in nuclear power plants for the future.

It’s likely that housing sales for 2011 will be the lowest in 20 years. For battered consumers who have seen the value of their homes decrease, a recovery of the housing market would be appreciated.

Even though the Iraq War has ended, the War in Afghanistan trudges on. The U.S. needs to stop these senseless wars that rob out nation of its vitality and the lives of its young people.

It’s a national tragedy that those businessmen and women who created the Great Recession have not gone to jail. I hope that changes in 2012.