Home About Newsletter Categories Donate
Recall of the Week: Build-a-Bear Colorful Hearts Teddy Bears due to choking hazard
12 ways to go green in 2012 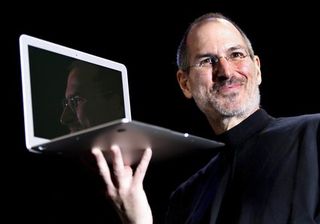 In hundreds of articles and posts, Jobs was lauded for his leadership at Apple and Pixar and for his innovative ideas and sense of design.

A few articles described pancreatic cancer, what the symptoms and treatments are.

But no one wrote about what an outrage it is that the War on Cancer has failed, and the nation’s leading visionary had his life cut short due to its ineptitude. Why was there absolutely no discussion about this?

Cancer is scary. No one wants to get it. People don’t want to talk about it. Cancer in America is surrounded by fear.

And Big Cancer – the American Cancer Society and most other cancer non-profits, pharmaceutical industry, and federal government – wants it that way.

When people are fearful, they don’t question the how the War on Cancer is being carried out or how the billions of dollars on research are being spent.

In his State of the Union speech in 1971, President Richard Nixon declared the War on Cancer. Nixon signed the National Cancer Act to make the conquest of cancer a national crusade.

Since 1971, the federal government, private foundations, and companies have spent about $200 billion searching for cures.

In the United States, 550,000 to 600,000 people die from cancer year after year, or roughly 1,500 people per day. This puts cancer as the second leading cause of death in the U.S. just behind heart disease, with it looking to take the number one slot given current growth statistics.

War on Cancer has wrong objectives

Sharon Begley, science editor for Newsweek, says the War on Cancer has the wrong objectives and people are dying from cancer as a result.

In her article, “We Fought Cancer…and Cancer Won,” Begley says:

Indeed, it is possible (and common) for cancer researchers to achieve extraordinary acclaim and success, measured by grants, awards, professorships, and papers in leading journals, without ever helping a single patient gain a single extra day of life. There is no pressure within science to make that happen.

It is no coincidence that the ratio of useful therapy per basic discovery is abysmal. For other diseases, about 20 percent of new compounds arising from basic biological discoveries are eventually approved as new drugs by the FDA. For cancer, only 8 percent are.

Critics of the War on Cancer question the emphasis on scientific findings rather than helping cancer patients, she says.

By the 1980s, critics were asking why the war on cancer was spending the vast majority of taxpayers' money on elegant biology that cured millions of mice rather than on the search for more practical advances...

There is no more common refrain among critics of how the war on cancer has been waged: that innovative ideas, ideas that might be grand slams but carry the risk of striking out, are rejected by NCI [National Cancer Institute] in favor of projects that promise singles.

The infrastructure of cancer is to keep things moving along as they have been and to reward people doing safe research, says Begley. Exciting new ideas haven't fared well.

The huge majority of funding for cancer has gone into the search for ways to eradicate malignant cells rather than to keep normal cells from becoming malignant in the first place, she says. Scientists are looking for “magic-bullet research” because that's what brings the dollars in.

Scientists think studying whether broccoli prevents cancer is difficult, Begley says. And, broccoli can't be patented, so without the potential payoff of a billion-dollar drug there is less incentive to discover how cancer can be prevented.

Another missed opportunity is the use of natural compounds and nondrug interventions such as stress reduction to keep the microenvironment inhospitable to cancer, she says.

Environmental causes of cancer not researched and publicized

An additional facet of the misdirected emphasis of the War on Cancer is the failure to research and make known the environmental causes of cancer.

For about 20 years it’s been known through studies that children and pets have higher rates of cancer if they live in households that use pesticides in their yards. Despite this information, pesticides continue to be sold in brightly colored boxes in home improvement and big box stores, department stores, and supermarkets with no warning of these dangers.

America needs to change its public policy about pesticides and chemicals that cause cancer.

It was extremely disappointing recently to see the wide-spread coverage that a report from the Institute of Medicine received. It said a comprehensive review of environmental factors revealed that no one factor makes a huge difference in the development of breast cancer. The institute said things not to worry about include hair dye, cell phones, and BPA.

This advice differs widely from that offered by the Breast Cancer Fund, which encourages women to avoid BPA and a number of chemicals found in cosmetics, food, plastics, and household cleaners. See the fund’s “Which Chemicals Are Linked to Breast Cancer” for more information.

The institute’s report was based on a review of scientific literature on breast cancer. It shows the need of Big Cancer to continue to keep consumers fearful and uninformed about the causes of cancer. When the public isn’t knowledgeable, it won’t call for chemicals that cause cancer to be banned, thus reducing industry profits.

When a TV-station in the Seattle area asked a breast cancer survivor about the results of the report, she was unimpressed. She said, and I agree, that cancer rates are increasing rapidly so the role of environmental factors needs to be understood and publicized.

I also think that the federal government has its head in the sand about cell phone radiation.

A new study in Sweden raises serious concerns about the potential for a large increase in brain cancer resulting from widespread mobile phone use.

So, it’s difficult to lose Steve Jobs, as an Apple user someone who I admired, at such a young age.

I’d like to see consumers become more informed about the failures of the War on Cancer and demand accountability from politicians, not-for-profit organizations, the federal government, and the pharmaceutical industry on how cancer research is being conducted.

The goals of cancer research should be preventing deaths, not fancy science that promotes the scientists.

I think you make a really good point here. Cancer claims several lives every year and it still seems like we aren't doing nearly as much as we should to overcome its effects.