Home About Newsletter Categories Donate
Recall of the Week: IKEA ANTILOP high chairs due to fall hazard
Levels of cadmium reduced in jewelry for kids, adults by some retailers

Obama appoints another chief of staff who lobbied against consumer interests 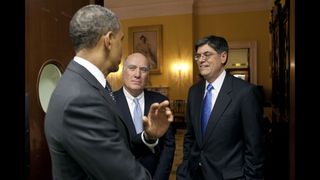 It was disappointing to learn that President Obama’s new chief of staff, Jacob Lew, will be the second appointment to the position with ties to Wall Street.

Lew's tenure as head of Citi's unit was disastrous, according to The Huffington Post article “Bill Daley Resigning: Obama Chief of Staff Stepping Down.” Although he personally earned $1.1 million for his efforts, the division lost $501 million in a single quarter of 2008.

Bill Daley was the head lobbyist for JPMorgan Chase, the nation's second-largest bank, which issued at least $30 billion in subprime mortgages during the housing frenzy that led to the Great Recession. During his work at JPMorgan, Daley lobbied against the creation of a Consumer Financial Protection Bureau.

Daley also has ties to the pharmaceutical industry, serving as a director of Abbott Laboratories for several years after leaving the Clinton administration, where he was secretary of the U.S. Department of Commerce.

By selecting Lew to be his new chief of staff, Obama is replaced one opponent the Dodd-Frank with another.

“Dailey served as the Big Business conduit to the highest levels of the White House,” Public Citizen said in a statement. “He never should have been brought in...

The group wants Lew not serve as a Big Business channel to the president in the way Daley did, but to carry out policies in the consumer interest:

It’s long past time for the Obama administration to abandon its unrequited affection for Wall Street and Corporate America. We live in populist times – enormous economic, political, and ecological crises call out for populist policies that are both right on the merits and strongly favored by the public. Now’s the time for the administration finally to pursue a populist agenda.

I agree. Consumers must exercise their power in the halls of government to combat the tremendous amounts of money that the banks and business interests pour into the coffers of the nation’s lawmakers.