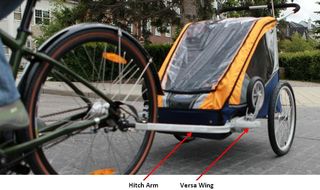 The bicycle trailer’s hitch mechanisms can crack and break, causing the trailer to detach from the bicycle, the company and U.S. Consumer Product Safety Commission said in a statement. This poses an injury hazard to children in the bicycle trailer.

The firm has received 24 incident reports worldwide, three of which occurred in the United States, involving the bicycle trailers and the conversion kits. No injuries have been reported.

Recalled conversion kits have hitch arms that attach the carrier to the bicycle with model number “20100503” printed on a label attached to the aluminum tube next to the warning label. Older conversion kits without a label, but with a release push button located where the hitch arm inserts into the carrier, are also being recalled.

Consumers should immediately stop using the recalled bicycle trailers and bicycle trailer conversion kits and contact Chariot Carriers for a free repair kit, which the consumer can install, the company and the commission advise.

For more information, contact Chariot Carriers at 800-262-8651 between 10 a.m. and 6:30 p.m. ET Monday through Friday or visit the firm’s website at www.chariotcarriers.com.