Home About Newsletter Categories Donate
It’s time to regulate advertising of high-sugar ‘food’ to kids
Surviving cutting the electric cord on my hedge trimmer is my best consumer experience this week, while uninspired help from a credit union clerk disappoints

Every year when fireworks are brought out to celebrate the Fourth of July, I get nervous. So many things can go wrong. 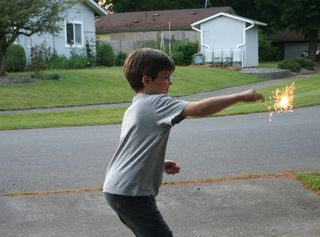 Fireworks injuries most often resulted in burns to the hands and head, including the eyes, face, and ears. Sparklers, firecrackers, and aerial devices were associated with the most incidents, according to a study by the U.S. Consumer Product Safety Commission.

The study found that 65 percent of all fireworks injuries in 2011 occured during the 30 days surrounding the Independence Day holiday.

While the majority of fireworks injuries involve emergency room treatment, more severe and fatal injuries occur when consumer use professional-grade and homemade fireworks. Reports of faster-than-expected explosions and unpredictable flight paths of aerial devices have resulted in tragic injuries and death for some consumers.

In the four reported fireworks-related deaths, the victims were killed when illegal devices exploded, causing severe trauma to the head and face; in one case, a decapitation occurred, the commission said in a statement. In other accidents involving professional-grade or homemade devices, victims were severely burned and some lost fingers.

The commission urges consumers who use legal fireworks to take these safety steps:

Using these precautions during Fourth of July celebrations will help you have a safe event. A disfiguring accident or death would be a tragedy for you and your family.