Drownings are the leading cause of injury death for children ages 1 to 4, according to the U.S. Centers for Disease Control and Prevention. 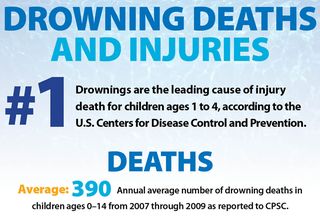 The U.S. Consumer Product Safety Commission is continuing its work to reduce drowning deaths by launching the third year of its Pool Safely: Simple Steps Save Lives campaign.

This year, Pool Safely is focusing on those most at risk of drowning:

Data from USA Swimming shows that 70 percent of African American children and 62 percent of Hispanic children can’t swim, making them vulnerable to drowning.

"CPSC's Pool Safely campaign has worked to prevent countless drownings, and we will continue to work to save even more lives this year," Inez Tenenbaum, chairman of the commission, said in a statement.

The commission recommends that parents and families build on their current safety systems at pools and spas by adopting additional water safety steps.

Adding as many proven water safety steps listed below as possible is the best way to assure a safe and fun experience, because you can never know which one might save a child’s life – until it does, the commission says in its safety fact sheet “Simple Steps Save Lives.”

Staying close, being alert, and watching children in and around the pool

Having the appropriate equipment for your pool or spa

New statistics released by the commission on drownings include:

I think one way to reduce the risk of drowning for small children is putting fences around the pool. Parents can't keep an eye on their children all the time so pool fences will help them avoid children to play near the pool area unattended.