More than 150 research physicians and scientists – including a former head of the U.S. Food and Drug Administration – and 50 meat, poultry, and dairy producers are calling on the FDA and Congress to end the overuse use of antibiotics in animal agriculture. 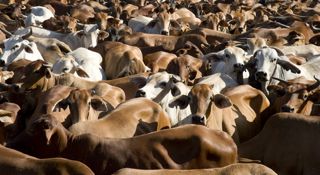 Each year, bacterial infections acquired in hospitals kill more than 100,000 Americans, and 70 percent of those infections are resistant to the drugs usually used to treat them, U.S. Rep. Louise Slaughter, (D-N.Y.), a microbiologist, said in a statement issued by the Keep Antibiotics Working Coalition calling for government action.

In a statement, the scientists said routine administration of antibiotics to farm and ranch animals is leading to human diseases that increasingly are resistant to treatment, which risks human lives and drives up medical costs. They cited a growing body of evidence linking antibiotic resistance in Salmonella, Campylobacter, E. coli, and methicillin-resistant Staphylococcus aureus infections to animal agriculture.

In their statement, farmers and ranchers stated that non-therapeutic use of antibiotics in raising farm animals is unnecessary, and threatens human health and the safety of the nation’s food supply.

“Hundreds of producers, including those who signed this statement, produce safe, healthy meat without continually dosing their animals with drugs they don’t need,” said Russ Kremer, a Missouri hog farmer.

Before changing the way he raised pigs, Kremer developed an infection in his blood that occurred after a boar gored his leg. The boar had been raised on a steady diet of feed that included penicillin to promote growth, and was likely the source of the resistant strain of strep, he said.

The scientific evidence is clear that the overuse of human drugs in food animal production is linked to human diseases that can’t be treated by antibiotics, said Margaret Mellon, Ph.D., senior scientist at the Union of Concerned Scientists, a member the coalition. A strong response is needed to this national crisis, Mellon said.

Among the other members of the coalition are the Center for Science in the Public Interest, the Natural Resources Defense Fund, the Lymphoma Foundation of America, STOP Foodborne Illness, and Physicians for Social Responsibility.