Home About Newsletter Categories Donate
Verizon ranks high, AT&T low in this year's Consumer Reports survey
State and local governments with sagging budgets give gigantic incentives to companies to locate in their areas

It was startling to read a Huffington Post article Friday that finance companies are raking in profits. 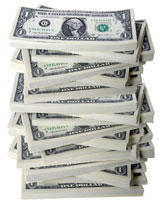 The article also said that workers are struggling. Average hourly pay, when adjusted for inflation, has fallen 0.7 percent over the past year, according to the Labor Department. And the unemployment rate in October was 7.9 percent, compared to a low of 4.4 percent in May 2007 before the Great Recession.

Consumers, too, are suffering, with layoffs and foreclosures continuing.

It’s becoming increasingly apparent that, although corporate America brought the country to its financial knees with the housing bubble debacle, it has learned new tricks for making record profits while leaving workers behind.

It’s appalling. Corporations want more and more money for themselves, while requiring employees to work harder for less and gouging consumers.

Americans gave Republicans and corporate America a clear message through the Nov. 6 election – we don’t want a country that runs on policies for corporations and the rich.

However, corporations are continuing on, as though nothing has changed.

An example? Another Huffington Post article said that Goldman Sachs is telling its clients to buy subprime mortgage investments again.

How can such a disastrous history be repeating itself in just four short years?

Workers and consumers need to fight against corporate power by joining together to further their interests.