Consumers responsible for the deaths in Bangladesh clothing factories? No, no, no 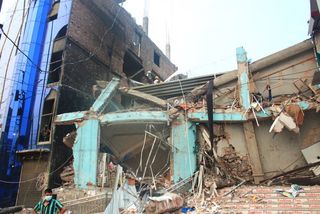 I was outraged yesterday when I heard twice on the news that consumers are responsible for the 350 deaths that occurred this week when a building in Bangladesh collapsed where five clothing manufacturing factories were located.

The comments, one made by a representative of the clothing industry in an National Public Radio story, said consumers are responsible because they want to buy cheap clothes and the only way that clothing manufacturers can do this is keep cutting and cutting the costs of production.

I don’t think so. Clothing manufacturers have the responsibility to provide a safe workplace for workers. One news report I heard said cracks started appearing in the walls, but workers were told nothing was wrong and they should keep working in the building.

Six people, two of the factory owners and four others, have been arrested, according to a Huffington Post article. Others are being sought in the tragedy.

I think the American companies that contact with these factories overseas, and consumers, too, need to pay more attention the safety conditions for workers in overseas factories.

However, for the clothing industry to try to “get ahead of the story” by blaming the deaths on consumers is ridiculous.