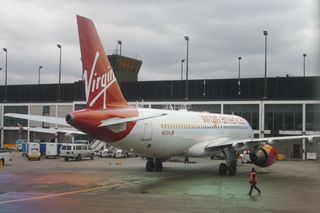 The researchers said that passengers are experiencing better performance by the airlines, although it might cost more to fly.

The performance of the nation's leading carriers in 2012 was nearly identical to the best year in 2011, according to the 23rd annual national Airline Quality Rating prepared by Wichita State University and Purdue University.

Of the 14 carriers rated for performance in 2011 and 2012, seven airlines improved, five airlines declined, and two are new to the rankings, including the overall No. 1 performing airline, Virgin America.

Improvement in two of four areas

Airlines improved in two of the four items in the rating: on-time performance and baggage handling. Involuntary denied boardings and the customer complaint rate were higher in 2012.

The challenge airlines have is whether airline performance quality improvements can be maintained as more people fly, said Dean Headley, associate professor of marketing at Wichita State University.

The airline industry performs most efficiently when the system isn't stressed by high passenger volume and high number of airplanes in the air, Headley said. When there are more planes in the sky and more people flying, airline performance suffers.

The researchers said when two airlines consolidate, it usually the airline quality ratings of the new company usually declines.

Brent Bowen, head of the Department of Aviation Technology at Purdue University, said the researchers will be watching to see if the consolidation of two highly rated carriers, former No. 1 AirTran and Southwest, will reverse the trend.

Below is the 2013 ranking of the nation's leading 14 airlines, according to the Airline Quality Rating, with the 2012 ranking following the Airline name:

The rankings changed most for American Eagle Airlines, from 15 up to 11, for 2012. Virgin America came into the rankings as the top rated airline. JetBlue, 2, and AirTran, 3, both maintained their top positions for 2012.

Hawaiian Airlines had the best on-time performance, with 93.4 percent for 2012, and ExpressJet and American had the worst, with 76.9 percent.

The researchers invite the flying public to participate in the Annual Passenger Survey at http://www.wichita.edu/aqrconsumersurvey.