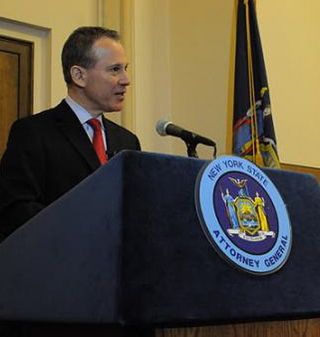 Signed in 2012, the settlement requires the nation’s five largest banks to improve their customer service practices by complying with new mortgage rules called servicing standards. Among these are four requirements spelling out the timeline for banks to process mortgage modification applications.

Schneiderman’s office has documented 339 violations of those standards by Wells Fargo and Bank of America since October 2012.

In response to complaints from New York homeowners put at risk by these banks’ violations of the standards, Schneiderman sent a letter to the agencies that oversee the settlement informing them that he intends to sue Wells Fargo and Bank of America.

Last year, Schneiderman joined 48 states, the U.S. Department of Justice, and the five largest mortgage servicers in negotiating the settlement. The agreement includes $25 billion for 49 states and requires consumer relief, such as mortgage modifications for at-risk homeowners, which could include lower-interest rates and principal reductions.

The settlement also includes 304 “servicing standards,” which participating servicers are required to follow and are intended to make it easier for homeowners to seek loan modifications. The servicing standards were included in the settlement to address long-standing complaints from consumers and advocates that servicers agreeing to the settlement – Ally Financial/GMAC, JP Morgan Chase, Citibank, Bank of America, and Wells Fargo – often failed to provide fair and timely services to their customers.

The servicing standards include: a prohibition against dual tracking, the practice of negotiating a loan modification with a borrower while at the same pursuing foreclosure; a requirement that every customer requesting assistance be assigned a single point of contact; and requirements that set out the timeline in which the servicers must respond to customers who are actively seeking loan modifications.

The settlement agreement also provides that any party to the settlement may bring an enforcement action in U.S. District Court for the District of Columbia following a 21-day notice to the Monitoring Committee set up to enforce the agreement.

During the 21-day notification period, the committee may choose to pursue legal action on behalf of the party using the committee’s own authority under the settlement, or they can defer action. If the committee defers, then the complaining party may pursue the legal claim on its own after waiting an additional 21 days.

On Friday, Schneiderman sent a letter to the monitor and to each member of the Monitoring Committee notifying them of his intention to bring a legal claim if the committee doesn’t act. The letter includes written complaints against Bank of America and Wells Fargo and back up documentation showing the severity of the violations.

Many of the organizations are grantees of the Attorney General’s Homeowner Protection Program, or HOPP, a three year, $60 million effort to fund housing counselors and legal services providers to help homeowners avoid foreclosure.

Attorney General Schneiderman’s letter to the Monitoring Committee can be found at www.ag.ny.gov/pdfs/Letter%20to%20Monitoring%20Committee%20NYS%20AG%205%206%2013.pdf.

Update: When the lawsuit was filed, Bank of America wasn't included. Schneiderman’s office reached an agreement with the bank for additional protections in its procedures for carrying out the terms of the mortgage settlement.