The vast majority of sunscreens available to the consumer aren’t as good as most people think they are, but a handful of products rise above the rest. 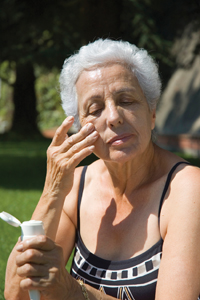 Those are the findings of the Environmental Working Group, which recently released its 7th annual Sunscreen Guide that rates the safety and effectiveness of more than 1,400 sunscreens, lotions, lip products, and makeups that advertise sun protection.

The EWG researchers found that only 25 percent of products on the market in 2013 offer strong and broad UV protection and pose few safety concerns.

Protection from clothing and shade

“The best advice for concerned consumers is to use sun-protective clothing, stay in the shade to reduce intense sun exposure, and schedule regular skin examinations by a doctor,” said Sonya Lunder, senior research analyst at the EWG.

Lunder said consumers should use the EWG’s guide to find the best sunscreens for skin that isn’t protected by clothing.

“Despite an increasing awareness of the sun’s risks, rates of melanoma – the deadliest skin cancer – have tripled over the past 35 years, with an annual increase of 1.9 percent per year since 2000,” she said.

Part of the reason for the increase may be the decades of deceptive marketing claims by sunscreen manufacturers, EWG researchers said.

The EWG believes that the U.S. Food and Drug Administration should require companies to stop selling high-SPF sunscreens – above 50+ – which account for one in seven products on the market. As a result of misleading and confusing marketing claims, consumers frequently misuse sunscreens and spend more time in the sun than they should, putting themselves at greater risk, according to the EWG.

In addition, until recently, sunscreens provided little protection from the sun’s ultraviolet A rays. Sunburns are caused mostly by short but intense ultraviolet B rays. Longer UVA rays, which penetrate the body more deeply, inflict more damage and may contribute to or cause cancer.

The FDA’s current definition of “broad-spectrum” still results in inadequate UVA protection, according to the EWG.

In 2011, the FDA issued long-awaited sunscreen labeling standards promised since 1978. Under the new rules, companies are now prohibited from making misleading advertising claims such as “sunblock,” “waterproof,” and “sweat-proof.” The FDA also set the first-ever standards for sunscreens that claim to provide broad-spectrum protection.

However, the agency now allows most sunscreens on the American market to make claims that they help lower the risk of skin cancer and sun-related skin aging.

The EWG’s analysis of 750 beach and sport sunscreens found that the new FDA rules haven’t led to dramatically better sunscreens than those offered in previous years.

While nearly every sunscreen on the market meets the new FDA rule for broad-spectrum protection, that standard is so weak that half of the sunscreens on the American market couldn’t be sold Europe, where the safety and effectiveness rules are more stringent.

European sunscreen makers voluntarily comply with European Union recommendations that a product’s UVA protection and SPF be coordinated so that the UVA protection is at least one-third as strong as the SPF.

I hope your days in the sun are safe as well as fun.