Health care workers suffer more injuries and illnesses on the job each year than those in any other industry, but the Occupational Safety and Health Administration conducts few inspections of health care facilities and is hampered in its ability to take action to resolve unsafe conditions because of the absence of needed safety standards, a report by Public Citizen shows. 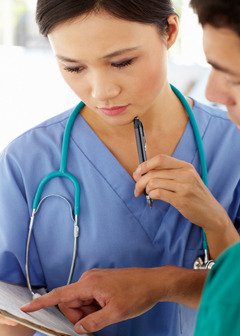 Public Citizen, a consumer advocacy group, recommends that OSHA significantly increase the number of inspections of the health care industry facilities and pursue standards to ensure that workers are protected from the risks posed by musculoskeletal disorders, workplace violence, and other threats. It also recommends that Congress significantly increase OSHA funding.

Nurses, nursing aides, orderlies, and attendants suffer more musculoskeletal injuries than workers in any other field, according to the report. Costs associated with back injuries in the health care industry are estimated to be more than $7 billion annually.

In 2010, health care employers reported 653,900 workplace injuries and illnesses, about 152,000 more than the next most afflicted industry sector, manufacturing. The construction industry has the most inspections.

In response to questions by Public Citizen for the report, OSHA said that it doesn’t have the resources necessary to develop certain standards. OSHA’s responses are included in the report’s appendix.

In addition, Public Citizen said in the report that the agency’s rulemaking efforts have been blocked.

In 2000, the agency published a final standard to protect workers in all industries from ergonomic stressors. But Congress repealed the rule before it took effect.

At the beginning of the Obama administration, the agency proposed a rule to add a column on employers’ incident reporting logs to designate whether workplace injuries were musculoskeletal disorders. But the administration delayed the proposed rule, and Congress later blocked it.

The Public Citizen report said OSHA is attempting to partially address the frequency of injuries among nursing home employees with a “national emphasis program,” which aims to address ergonomic stressors, bloodborne pathogens, tuberculosis, workplace violence, and slips, trips and falls.

But the program doesn’t cover hospitals or other health care settings, where high injury rates also have been reported, according to the report. In the absence of a standard for ergonomic safety, the agency must rely on its “general duty clause” to issue citations for unsafe ergonomic conditions. General duty clause cases require a high evidentiary threshold, and only seven citations regarding ergonomics have been issued to nursing homes over the past two fiscal years.